Garage Graphix was a not-for-profit community based art, design and screen printing organisation, based in Mount Druitt, western Sydney (1981–1998). It evolved from the Mount Druitt Street Artworkers and was developed by arts workers active in the women’s movement, who were committed to working with and for communities to facilitate expression of their values and beliefs; to illuminate issues of concern and to advocate for positive change. A collective in its early days, Garage Graphix became an incorporated entity in 1982. It was governed by a management committee comprising local residents and community workers and it provided communities throughout western Sydney with access to specialist skills, printmaking equipment and facilities.

The “Garage” was a strong advocate for equity in funding and resources for western Sydney and participated in campaigns, networks and advocacy groups. In its time, it was at the forefront of community cultural development practice, winning the Ros Bower Award (an award that recognises an arts worker or an artist with a proven record of high achievement in the field of community arts and cultural development)  in 1991.  It provided employment for a large number of arts workers, arts administrators, visual artists, graphic designers and screenprinters for over 18 years. It also provided opportunities for traineeships and artist in residence placements.

It worked with communities offering a range of involvement – from access and skills development to complex projects over many weeks and months. The cultural program comprised: Community Access, Aboriginal Arts Program; Visual Arts Projects and commissioned work. The Aboriginal Arts Program was an integral and vital part of the work of the Garage for many years. Commissioned work evolved into operating a Design Service, one of the earliest social enterprises, to provide culturally sensitive designs for communities and government entities and to supplement the organisation’s funding.

Most of the time the creation of artworks was collaborative with the residents and groups participating in discussion, conceptual development, design, printing and distribution using the equipped space and skills of the arts workers to varying degrees. Artworks explored a vast range of concerns and issues as well as celebrating the strengths of community and the positive aspects of suburban life.

The Garage and its practice was supported to varying degrees by Commonwealth,  State and Regional funding agencies across the arts, health and education sectors as well as ongoing support from Blacktown City Council over the years. 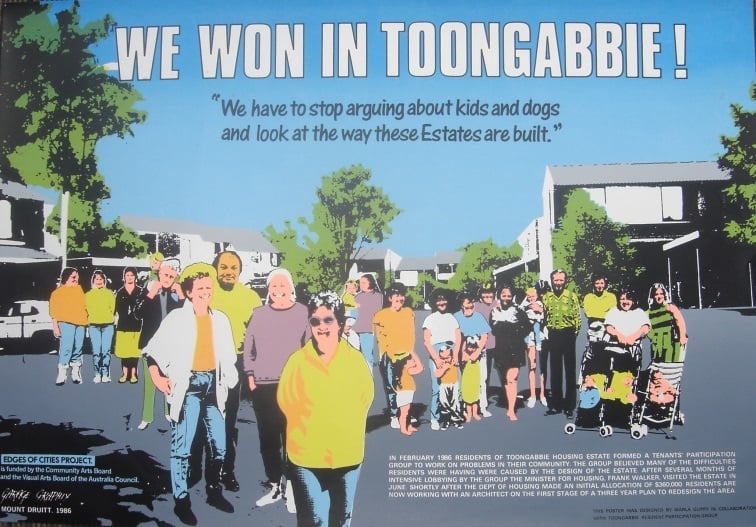 Garage Graphix was an important model of community arts practice at a time of significant social change in western Sydney. The 1970s and 80s was a period of rapid urban growth. New communities were often poorly designed with few facilities. Residents, especially women with young children, were socially isolated. Many suburbs had very large youth populations. An increasingly urbanised Aboriginal community in western Sydney was emerging. Located in the heart of the developing area of Mt Druitt, Garage Graphix embraced the social issues of the time and place.

Engaging directly with local communities was central to the creative process at the Garage. There was an underlying belief in the power of self-description, and the capacity of people to articulate the issues affecting their everyday lives. Community identity, women’s health, gender politics, LGBQTI rights, Indigenous recognition, youth issues, family violence and public housing design were some of the many subjects addressed by the community through creative work at the Garage. While the main artform was the poster, t-shirts, banners, fabric and design material were produced. A commercial design service was part of the mix.

Creative work with community groups at Garage Graphix was inclusive and consultative with hands on participation in all aspects of the design process. Artworkers, many of who were local or from suburban backgrounds themselves, adapted the community arts model to the western Sydney context. Detailed round table dialogues started the design process. Text often used community members’ own words, descriptions and phases. In a time before digital cameras and mobile phones, photographs of people and place held real power in describing local issues. Participating in printing a poster or T-shirt completed an empowering process.

Creating a great product, which successfully communicated community issues, was central. Yet the sense of pride and ownership which community members had when they completed their artwork speaks of the transformative power of art in everyday life. The artworks still resonate today. Many who participated in Garage Graphix recall the workshop as an inclusive environment where the huge challenges western Sydney faced were tackled with great creativity and a little humor.