In Conversation with Reza Taghipour

Recently Iranian artist and calligrapher Reza Taghipour exhibited Heech – Beyond Nothingness at The Leo Kelly Blacktown Arts Centre from 21 April to May 2021. Reza’s practice is a form of Iranian calligraphy painting inspired by abstract expressionist paintings, the colours of the Tabriz style in Iranian miniature, and by the world of nature. In his new work, Taghipour has combined portrait paintings with calligraphy that ‎incorporate both aesthetic qualities and conceptual elements. We spoke to Reza about his artworks and the inspiration and concept behind his exhibition.

When you are doing Persian calligraphy, all you do is focus on the pen, ink and sheet. You forget the world. It’s like meditation.” – Reza Taghipour 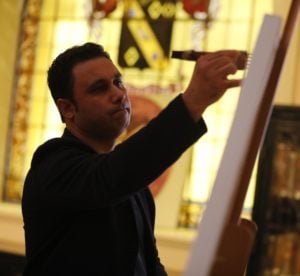 What does Heech mean and why did you choose this title?

Heech in Persian is an ambiguous word with more than one meaning. It is a philosophical word. The approximate translation in English means nothing or nothingness.

I’ve been exploring the word Heech for 20 years. Each time that I create a new work I have different feelings and ideas about this word. I try to visualize what I feel about nothingness during a specific time in my life and I combine different colours and different forms to visualize the inner essence of nothingness. Some works appear as a ‘black-practice’ (Siah Mashq), some in minimalist form, and some in ‎abstract expressionist form, to communicate different perceptions of the word with the ‎audience. ‎

My understanding of the word Heech has changed depending on the different stages in my life and how I feel during that time.

What is the origin of Persian calligraphy and why did you choose this art form?

Who are the women in your paintings?

She’s my bride. I started two years ago to visualize the feelings from my earlier years of migrating to Australia. I was learning new things and integrating in this host country but I realized that I was losing my background. I tried to reflect this concern in my artworks. As you can see, some of the artworks in my exhibition are melting. This was to display my feelings towards cultural confusion in my earlier years when I first migrated to Australia.

All the women in my paintings are of my wife.

What is your next project?

Nastaliq has very strong instructions and all letters are written based on the Golden Ratio, and the length, width and height of the letters are proportional to each other. It takes at least 10 years to learn this art and be able to write Nastaliq script professionally, for example, a proficient calligrapher is able to write one word ten times with exactly the same size and shape.

When you are practising Persian calligraphy, your focus is on the pen, ink and sheet. You forget the world. It’s like meditation.

Photography provided by the artist.