Wendy Murray is a Sydney-based artist and arts-educator. She was artist-in-residence at the Leo Kelly Blacktown Arts Centre from 4 July to 31 August 2019, running a pop-up studio called The Poster Centre, where visitors could come in and learn more about poster-making and printmaking processes.

I sat down with Wendy in The Poster Centre to chat and collaborate on a poster. Here’s what I learnt about the artist and her practice.

Firstly, tell me a bit about yourself and your practice.

I’m a poster-maker and I love drawing. I also run community workshops, teach, and sell my posters. I love screenprinting, and you could say my practice is diverse. I don’t think that’s by choice, it’s just the way things are. Making a living as a full time artist, it helps to have quite a diverse practice. 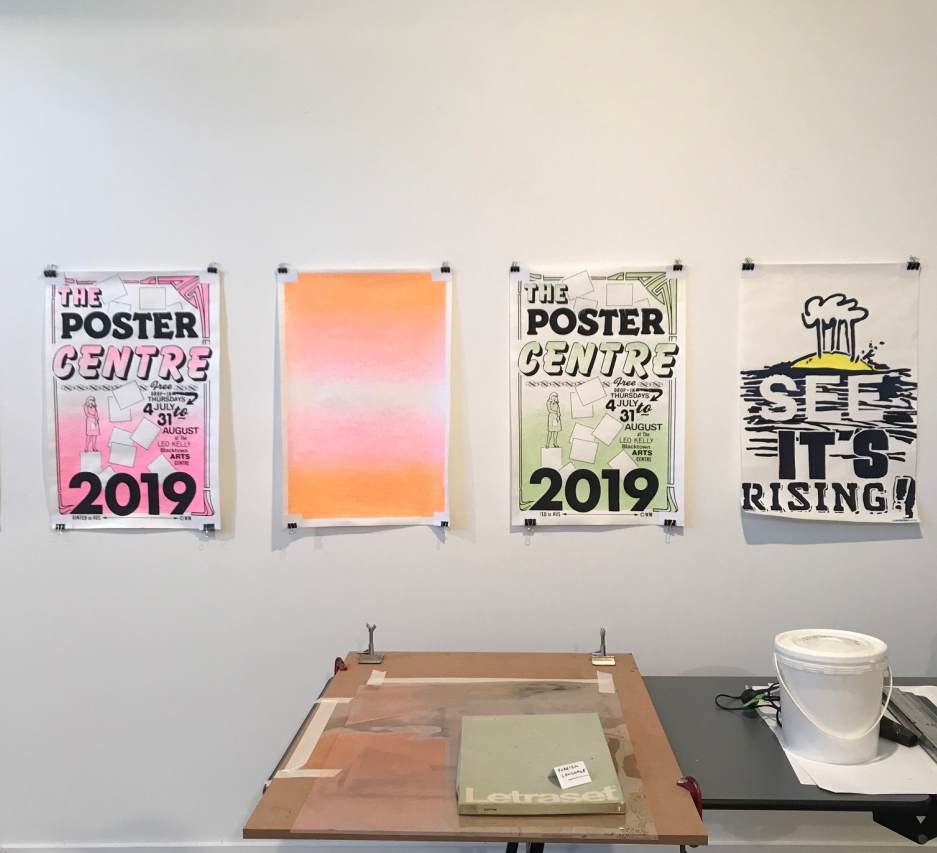 What attracted you to printmaking originally?

When I did my undergraduate design degree at Wellington Polytechnic, now Massey University, I had a class project for a typographic class and it was about engaging the audience. I worked with one of my professors in the screenprinting lab for the first time. I thought, ‘I could do a screenprinted poster, this will be amazing!’ He guided me through that process, but the access to those facilities was limited. That was in the late nineties. I did a residency at Megalo Print Studio in 2010 that coincided with the change in legislation on carrying spray cans and pens. I’d done a lot of street art and stencil work previously, and then I did my residency at Megalo Print Studios with Alison Alder, one of the Redback Graphix crew. I didn’t know anything about Redback Graphix. I’d seen the posters, but I didn’t really understand the history. Meeting Alison, and then having access to the incredible print facilities there, was a game-changer. Before that, I’d only done some rudimentary printing in my studio. I wouldn’t call myself a printmaker; I’m a poster-maker and screenprinter. I’ve tried other printmaking techniques but screenprinting is the one for me. It’s connected through necessity. If I need a drawing, it’s amazing that I have the skill that I can use if the drawing is required. In my series of ‘Sydney We Need To Talk’ posters from 2018, I used drawing in conjunction with letter-press processes. I wanted to reflect the human element in our urban environment. If the poster is done with Letraset text or letter-press text you don’t get that sense of personality and people. It’s about displacement of people and homelessness, ideas that can be quite cold sometimes, especially when you want to engage an audience that hasn’t been homeless. You engage them with a beautiful drawing, a line that seduces them, so they look at the message that way. The drawing isn’t a massive component. However, I did a commission with the Australian War Memorial Museum last year which was a large-scale drawing turned into paper-cut stencil poster. That was all about the drawing and the brush marks; in the same way that the Soviet TASS window posters were made. That process of making posters is something I’d really like to pursue. I have this whole suite of tools including Letraset and letter-press; I can just pick up whatever is appropriate for that particular work.

What role does printmaking and poster-making play in social justice movements and protest?

It’s the immediacy of screenprinting and paper-cut stencils. I’ve been fortunate enough to have seen some of these at the Center for the Study of Political Graphics (USA). The centre gave me access to their folder of posters. They are remarkable. And what’s so awesome about them – which is lost when you look at the reproductions in the book – is the immediacy of them. They’re technical, but they’re simple and they’re imperfect. Here in The Poster Centre, you can make a poster with me and you can do it so quickly, it’s very rewarding and accessible.

What led to you wanting to facilitate a space such as The Poster Centre at the Leo Kelly Blacktown Arts Centre, where people can come in and make posters with you like they did at Garage Graphix in the eighties and nineties?

My dream would be to have my own space that was like this – where three days a week I might be working on my own projects and working alongside other artists, and then one day a week I’d have the space available to whoever wants to come in and collaborate. I could also have a day when other artists can come in and make their own work. How fantastic would that be? 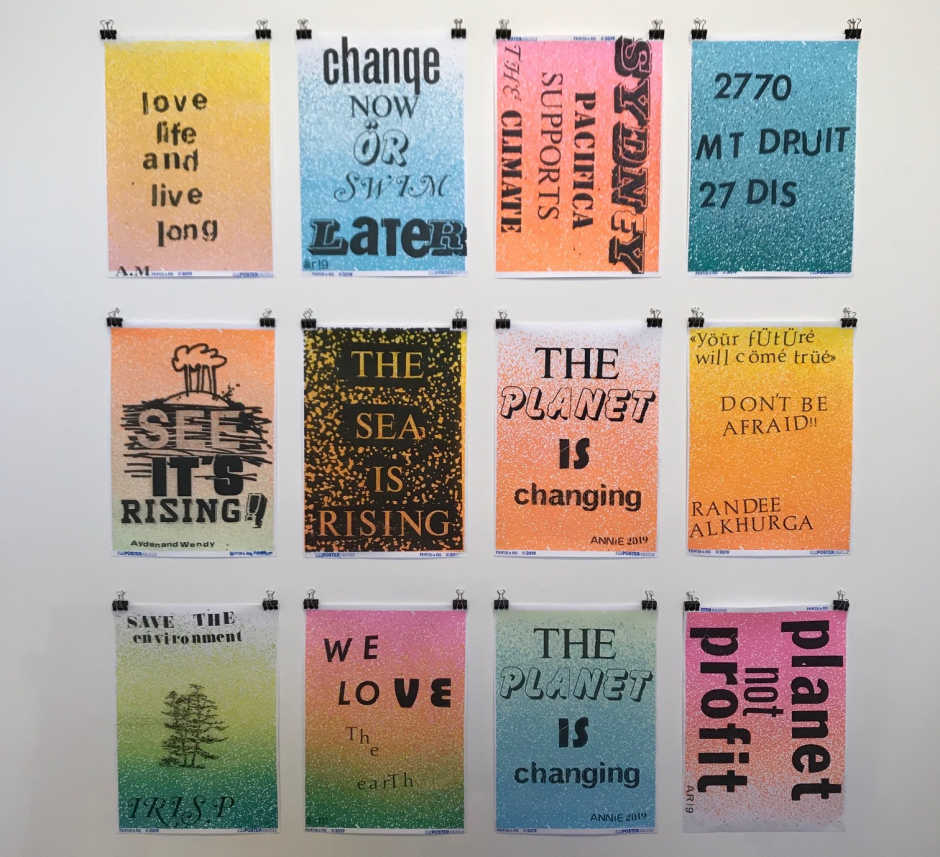 Would you say that the process of making a poster is as important as the end result?

No. I think a poster can communicate without a lengthy process. If someone has a message, the question might be: ‘Do you want to learn to screenprint or do you have a message you want to disseminate?’ If you come to me and say, ‘I’ve got a message’, we might set some Letraset on an A6 sheet and go straight to the photocopier and not pull any ink for your poster. It’s a question of weighing up the message and the process. I think this adds to that immediacy. You can make a poster any way you like. You could just go out there now, rip some posters off the wall in the street, collage them up, and reattach them to the street, using a Stanley knife and some wheat paste. You don’t necessarily need to go through the complicated process of photo stencil screen-printing. A poster can be a single object; it doesn’t have to be a multiple. It just depends on what your message is and how you want to say it with your poster.

What’s your favourite part of the printmaking and poster-making process?

Working in The Poster Centre allows me to do what I enjoy most: being a conduit, by facilitating other people’s ideas and helping them distil down what they want to say in the poster. Working with the Sydney Pacifica group from 10am until 3pm for two days was a really fantastic collaboration. I introduced them to methods of quickly making posters. We got down to the nuts and bolts of their poster ideas: How did they feel about global warming? How does it affect their island communities? We drilled down to their honest and open opinions about it and then transformed the ideas into simple graphics that could be communicated in a poster format. It seems I am able to help people communicate how they feel about an issue or idea. The ‘See It’s Rising’ poster was a collaboration with one of the young artists from the group. I can do the process on my own, but it’s so much more satisfying, interesting and exciting when you’re working with other people. 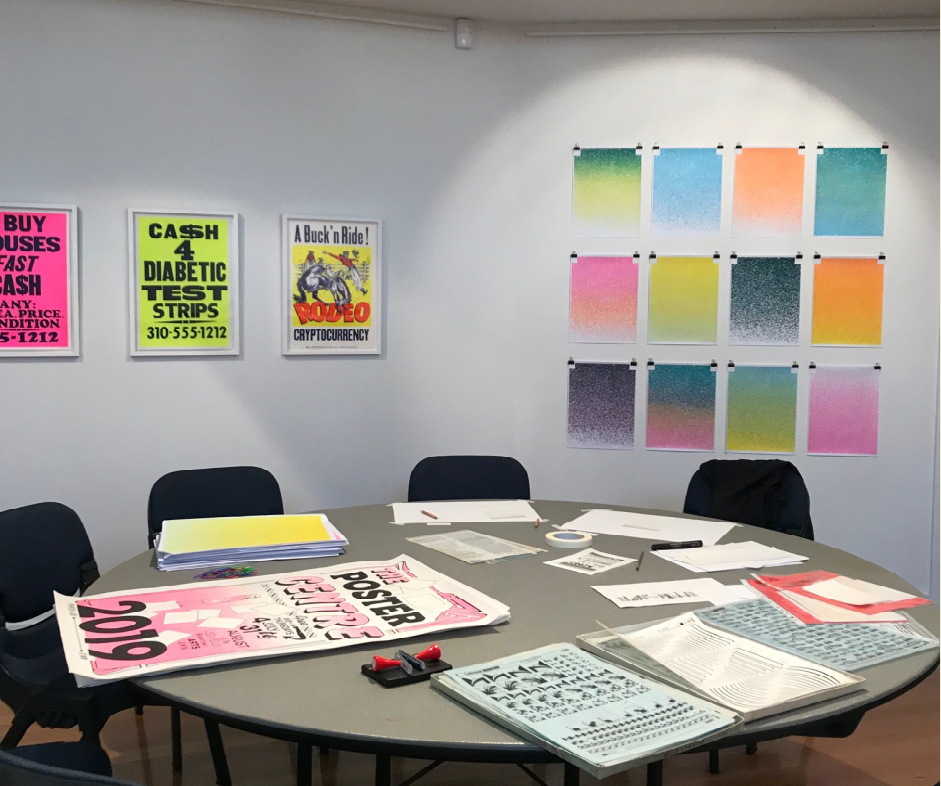 Finally, what advice would you give to someone wanting to get into printmaking or poster-making?

Just do it! With screenprinting, you can sit around and say ‘Okay, how am I going to get access to a studio?’ I think there are two access studios in Sydney. All you need for screenprinting is screens and hinges – not an exposure unit. If you’d like to start printing, make a basic table-top set up. If you don’t feel like you want to get into screen, do some drawings and turn them into posters or, make some posters with a photocopier. Some of artist Alex Latham’s street posters poked fun at Sydney’s lock-out laws. They were digital drawings which he colour printed and pasted up on the street. Beautifully drawn, low-fi, A3 size, but big on impact. It’s about doing it, and then the more you do it the more you can get a sense of how you can make bigger prints or increase your quantities. Just make a start and get into it any way you can: photocopy, collage; give it a go. There are so many options. It doesn’t have to be highly technical, a photocopier is a printer. So use that tool, whatever tool you’ve got.