Mehwish Iqbal spent her first 11 years in Pakistan before migrating to Australia and settling in western Sydney. Over time, her artworks have formed a narrative that advocates for social justice issues, which she states aim to “highlight the voices of minorities and marginalized communities”.[1]

For the 2016 exhibition Diaspora-Making Machines at The Leo Kelly Blacktown Arts Centre, Mehwish was commissioned by Blacktown Arts to create the artwork Force Field of Complex Journeys (2016). This work has recently travelled to New York for Mehwish’s solo exhibition Mind, Body, State at HG Contemporary. Prior to the current exhibition in New York, the artwork was also featured twice in 2017. First at her solo exhibition Flux at M. Contemporary in Sydney and then the Hong Kong Art Central. 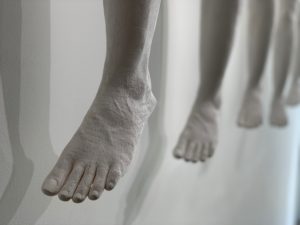 Mehwish is an established multidisciplinary artist who has developed a diverse creative practice that spans painting, printmaking, textiles, ceramics, sculpture and installation. She uses these materials to explore her personal and the collective experience of exploitation by geopolitical power structures.

Her artwork Force Field of Complex Journeys (2016) is exemplary of her diverse technical skill, and is composed of a series of porcelain casts of the artist’s left leg. The legs are an almost precise copy of one another, and when exhibited in a straight row in diaspora-making machines (2016), they appear to be the product of mechanical ingenuity. The repetition of the single leg, with one foot stepping in front of the other, mirrors the steps taken by women and children displaced from their homelands, who were forced to leave and often journey by foot “due to war, conflict and exile.”[2]

Each fragile porcelain leg is etched with numerous textual and pictorial signs and symbols that reference the often perilous and devastating journeys endured by displaced women and children.[3] The selected stories engraved into the porcelain legs belong to a support group for refugee and migrant women in Mt Druitt, who shared their experiences with Mehwish through drawing workshops. [4] 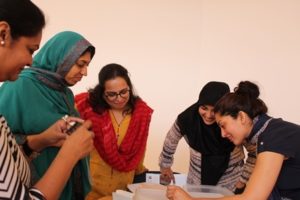 Now the feet that once walked the ground and carry narratives from Pakistan and Australia touch down in the United States at HG Contemporary in New York.

At this turbulent political time on new terrain and a site of mass migration, these feet stride and their footsteps echo the same significant narratives when they were first exhibited.