Mehwish Iqbal lived her first 11 years in Sangla Hill, a tehsil in Pakistan. Mehwish and her sister were often moved during their formative years and from time to time were looked after by the extended family. She now lives in Western Sydney in Australia with her own family. Mehwish’s personal journey and experiences greatly influence her art practice and thinking around notions of belonging, motherhood, globality and mass migration. 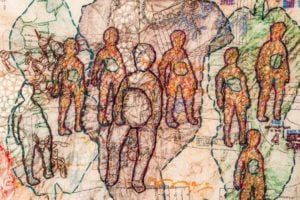 In the space of 5 years, since completing her Master of Fine Arts at the University of New South Wales, Mehwish has exhibited important works in a range of media that has taken her way beyond her formal training in fine art printmaking. Experimenting in diverse materials and processes, her quest has given rise to an emergent conceptual-based practice with its own distinctive visual language. The Turkish art writer, Evrim Altuğ, describes this as ‘a feminine, optimistic and fertile language that continuously refers to human skin and consciousness of shelter’.[1] Mehwish’s work recalls elements of Minimalism, Arte Povera and Indian miniature painting; an eclectic selection from east to west.

At the time of writing, Mehwish’s most recent work is a sculpture made from 5000 collected date seeds cast in porcelain. The Last Prayer takes on the appearance of a mound, with its base formed into a perfect circle. Traditionally, during Ramadan, three dates are eaten to break the fast to acknowledge the Islamic Prophet Muhammad, who broke his fast in this manner. Mehwish’s sculpture also refers to the communal acts of sharing and giving. (The seeds for this work were collected and given to the artist by various individuals and women’s groups in Western Sydney.) Having cast the seeds, the artist then etched each one with a surgical scalpel knife that accentuates not only the natural texture of the date seed, but in the artist’s words, “the appearance of female genitalia.” 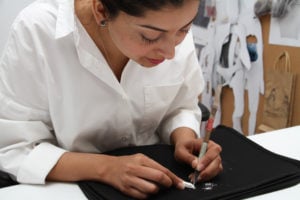 Mehwish Iqbal working in her studio, photographed by Alex Wisser.

A formal comparison with Ai Weiwei’s now famous Sunflower Seeds from 2010, is quite obvious; they are cast in porcelain and similarly arranged in a circular mound, but were individually made by artisans in Jingdezhen, China, and painted to resemble sunflower seeds. Similarly, Antony Gormley’s monumental Asian Field from 2003, was made by volunteers in Xiangshan County, China, and consisted of 190,000 individual clay figures. Yet The Last Prayer was made single-handedly by Mehwish Iqbal and speaks to the artist’s interest in labour (in its various forms), and the hand-made as a site of resistance to uniformity. Perhaps in response to the internet age, but also as a disruptive notion of the seed as the female reproductive organ and representative of motherhood.

The complexity and fragility of The Last Prayer continues through much of Mehwish’s work. Forcefield of Complex Journeys uses a similar disarming strategy. Recalling the Minimalist aesthetic — like a Sol LeWitt in human form — Mehwish’s artwork features what appears to be 12 identical porcelain casts of a leg, lined-up with the precision of a factory production belt. These are in fact cast from the artist’s left leg and refer to the multitude and repetition of perilous journeys undertaken on foot by women and children displaced from their homelands due to war, conflict and exile. In the development of this work, Mehwish met with a support group for refugee and migrant women in Mt Druitt in Western Sydney, who shared their personal migratory stories with the artist through drawing workshops.

Etched into each porcelain leg by Mehwish are complex signs and symbols in text-form and as pictograms that recall the often harrowing and tragic journeys by foot and the fragile state of becoming a resident in a new, foreign land. Even in the shallow shadows of the etched cast white porcelain it is difficult to read the finer details of the text and images. We are only given a certain level of permission to read fragments of these stories; the different languages and representations of figures, landscapes and places overlap and blur into one another like an ophthalmic disorder. Figuratively and literally, Forcefield of Complex Journeys is about the experience of dislocation. But more so, the work chimes with James Joyce’s coined term “dislocution” describing the double disruption of place and speech that is the condition of the displaced, or those in exile. 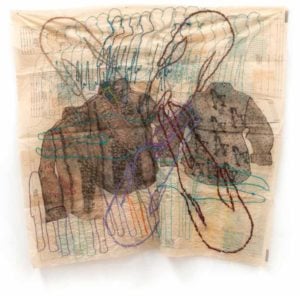 Similar misshapen forms of cultural translation are also apparent in Mehwish Iqbal’s series of multimaterial artworks that start life as ready-made dressmakers’ patterns for children’s and women’s clothes. The paper is fragile and crumpled, almost like tissue-paper, and bears the imprint of a predefined order and shape-to-fit, as if everything is already sewn-up! The artist then uses screenprinting and etching to add layers of representation as varied as world maps, animals, insects, plants, young children and pregnant women. The Italian Arte Povera artist, Alighiero e Boetti’s large-scale embroidered series Mappa (1971-89) was made with Afghan refugees in the Pakistan border camps, and the series stand today as a seminal moment in socially-engaged artistic practice that speaks of the condition of border-conflict and migration towards the end of the 20th century.

Mehwish Iqbal also stitches and embroiders, on top of the dressmakers’ patterns and printed layers, to describe the present global condition of forced mass migration. In many of these works we see the disruption, or tears, in the surface (which is also the ground and the pre-made order), and like the Japanese tradition of kintsugi, Mehwish treats breakage and repair as part of history, rather than something to disguise. The hand-made and the artist’s interest in labour appears again, through the meticulous and laborious method of stitching as artistic mark-making, and one which painfully and psychologically illustrates the body in its altered state of repair, dislocation or dislocution even. In the celebrated Columbian artist, Doris Salcedo’s sculpture we see a similar metaphorical and phenomenological use of material; the careful stitching of human hair, rose petals or grass into bastardised furniture for example, to communicate the injustices and pain caused by the disappeared, the forgotten, the displaced.

Mehwish Iqbal’s practice stands in a line of artistic tradition of developing new visual language and innovation in materials and processes that give form and contribute to our collective understanding of current, urgent issues of global significance. Homi Bhabha introduced Frantz Fanon’s Black Skin, White Masks, by saying that turning the European traditions of existentialism and psychoanalysis to face the history of the Other, ‘which they had never contemplated… leads to a meditation on the experience of dispossession and dislocation — psychic and social — which speaks to the condition of the marginalised, the alienated, those who have yet to live under the surveillance of a sign of identity and fantasy that denies their difference’.[2]

Mehwish Iqbal in her studio, photographed by Alex Wisser.

Archive | The Good, The Bad & The In-between