kanalaritja: An Unbroken String | A Reflection

Genevieve Stewart is a Kuku Yalanji woman and is studying a Bachelor in Design Animation at the University of Technology Sydney (UTS). She is currently undertaking an internship with Solid Ground and we asked her to respond to the kanalaritja: An Unbroken String exhibition.

My understanding of the exhibition was more than just the shell stringing, it was about women who were finding themselves and their cultural identity that their mothers and grandmothers weren’t allowed to practice when they were growing up on a mission. Some of the women who were featured in the documentary admitted to not knowing the practice until later in life. Through the exhibition I learnt more about the importance of culture and its recovery. 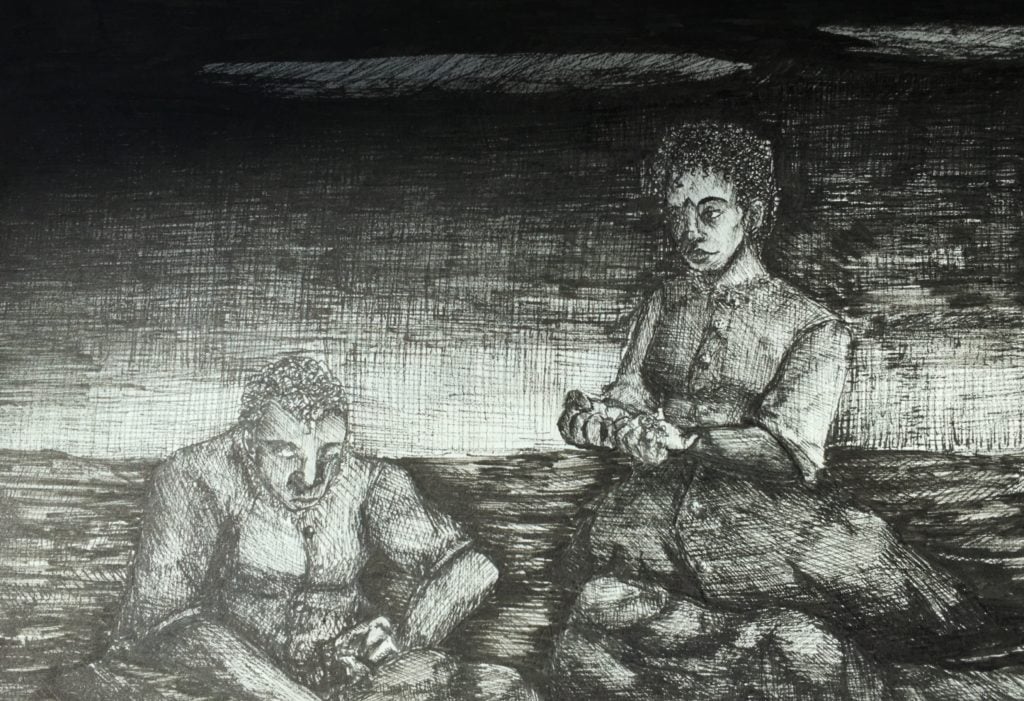 The two fictional women in the illustration are from the colonial period of the Stolen Generations. They both left their missions to return back to country and practice their culture by collecting shells in the ocean without caring that their colonial dresses were getting wet and dirty. I thought it would be ironic to use a style that is similar to a colonial etching, but here is used to empower Aboriginal people. The hands in the dark represent the older generation who almost had to stop their cultural practice of shell stringing. The hands are almost fading away into the darkness, but in the light there is another pair of solid hands. These hands represent the present and how the shell stringing practice is passed on and staying strong. I was learning how to shell string using a virtual bracelet. The two shells that stuck out to me were the Black Crows and the Cockles. Traditionally the Black Crows are strung in pairs, however I wasn’t aware of this fact when I strung them along.