Internationally acclaimed, Blacktown-based artist Khadim Ali is exhibiting new work in our current exhibition Daneha. In 2016, Khadim received a residency through our Creative Residency Program. In this interview, he reflects on his journey as a Hazara artist living and working in Blacktown.

Tell us about your personal history and artistic journey as a Hazara artist living in Blacktown .

My great-grandfather escaped persecution in Afghanistan in the 1890s and moved to India. After the partition of Pakistan and India, they chose to live at the border of Pakistan and Afghanistan in hopes that one day, Afghanistan will have a fair government and would welcome them back to their nation as citizens. This of course, never eventuated. So I am a third generation Hazara of these Hazaras who escaped Afghanistan.

I moved to Blacktown in early 2014 and have found it a very friendly and multicultural suburb of Sydney. Blacktown’s cultural diversity brings excitement for its locals who share their traditions and customs with our community.

What are the main themes and emotions behind your artistic work and practice? 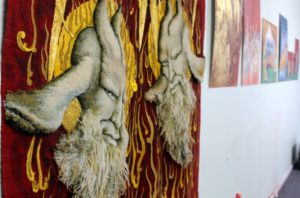 In the 1970s, the Hazaras in Quetta were granted citizenship by the government of Pakistan. I was born in Quetta as a Pakistani until 2005 when the persecution of Hazaras was at its peak in Pakistan with the presence of the Taliban and Al-Qaeda. Hazara killing was normalised in the city of Quetta. In the last 15 years, more than 2000 Hazaras have been massacred without a single perpetrator being charged by the government of Pakistan. This bred fear – a fear that led me to live in Australia. I am the illustrator of the demonisation of minorities in Pakistan and Afghanistan, and those minorities who are seeking asylum all over the world.

In 2016 you were granted a Blacktown Arts Main Street Studio Residency where you developed some major works including a commission for the Museum of Contemporary Art (MCA). Tell us about your time at the studio. 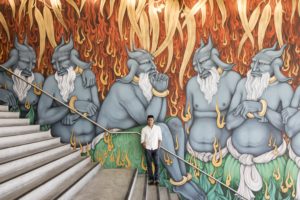 Khadim Ali with his mural ‘The Arrival of Demons’ at the MCA in 2017.

My residency at the studios in Blacktown was very productive as the studio was so conveniently close to home. Prior to taking residency in the Blacktown studios, I worked from the Artspace studios in Wooloomooloo. My commute was an hour and 20minutes one way, each day.

With the Blacktown studio in such close proximity, I could maximise my time and I produced many  works for exhibition while there, including my solo show at Milani Gallery in Brisbane, the refugee show at Casula Powerhouse and of course the MCA foyer wall mural. I developed the early stages of this work from the Blacktown studios through my initial drawings.

With the help of Blacktown Arts staff and access to their equipment, as well as the large size of my studio, I was able to prepare for the scale of the MCA mural within my own studio.

During your residency with us you received two major awards. Please tell us about these awards.

During that time I won the Sidney Myer Creative Fellowship and the Western Sydney Fellowship. The funding from these awards became the lifeline to my work and ideas. The awards have allowed me to travel and research to Afghanistan, Pakistan and South Korea, to also exhibit in the Lyon Biennale, as well as Vienna and Pakistan all within the year. The funding also contributed to my work in Blacktown Arts’ exhibition Daneha.

As an international artist based in Blacktown, what would your message be to our local artists, and in particular those from refugee and migrant backgrounds?

I think being a practicing artist in Blacktown is much cheaper than living in the centre of Sydney. Living in Blacktown being surrounded by many cultures and traditions is a true asset. It has allowed me to meet so many people from different cultures who share their skills and traditions.