In 2015, Tina was an artist-in-residence at the Main Street Studios, Blacktown. Two years on, we caught up with Tina to reflect on her experience of the program.

Tell us a bit about yourself and your practice.

I have worked mainly with printmaking, focusing on etching. I really enjoy working with multiple plate colour etching. I also like working with drawing, painting and photography. Since the residency, my focus has been on making digital prints. My work is inspired by the ordinary and mundane scenes of the city and suburban spaces. I like to capture the fleeting scene that can go unnoticed in our daily busy life. I am also interested in the sense of alienation that can be sometimes experienced in the urban environment, but also the beauty that can be part of these scenes. I love exploring the landscape that I am familiar with on a daily basis.

Before applying for a studio residency in Blacktown, what kind of experience did you have in the arts?

I hold a Bachelor of Fine Arts, Master of Art and a Master of Fine Arts from UNSW Art and Design. I have had many shows including solo shows at the the Robin Gibson Gallery. I am a member of the Sydney Printmakers whose members include Ruth Faber, Michael Kempson, Rew Hanks and many other extremely talented artists.

What were your expectations before starting your studio residency?

I came into the residency with an open mind. I wanted the space and experience to guide my art practice. I wanted to experiment with new ideas and methodology. The residency was broadly based on the roadway environment which meant there was room to play with ideas. I chose to focus on the interconnection of regions and how public transport plays a role in this.

Specifically as a printmaker, how were you able utilise your Main Street studio space to experiment with techniques?

The space was useful as it allowed me to remove myself from my usual art making habits. I was able to work on concepts and ideas and to focus more on photography and digital prints, which won me the 2017 Wyndham Art Prize. I also produced a series of paintings, one of which was included in the 2015 Blacktown City Art Prize. I would say that the only restriction was that I was not allowed to stay in the studio after business hours for security reasons which I totally understand, but later access to the studio would have been beneficial.

Following on from this, how did your practice as a printmaker develop during your residency? 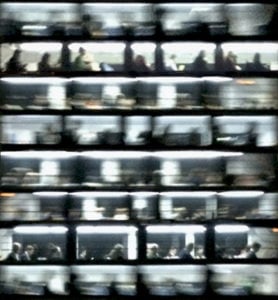 The residency has definitely helped to further my career as an artist. As previously mentioned, I recently won the 2017 Wyndham Art prize with work that began developing during the residency. I have also been a finalist in numerous art prizes nationwide. These include the Freemantle Arts Centre Print Award, Stanthorpe Art Prize, Blacktown City Art Prize, Rick Amor Drawing Prize, Bay of Fires Art Prize, and this year the The Paramor Prize: Art + Innovation and The Head On Photography Art Prize. Being part of the Blacktown Arts Residency Program was a great experience and I would recommend it to any artist thinking about applying. It exceeded my expectations as I not only got the chance to expand on my art practice and methodology but also develop on a professional basis.

What are you working on now?

I continue to work and expand on the ideas developed during the residency and I have been busy working on a series of work titled An Ordinary Day which so far includes digital prints and paintings. I want to continue working with digital print, get back into the studio and work on some etching and painting and continue observing the urban landscape.

The POWER of Dennis Golding