Leanne Tobin is the recipient of the Aboriginal and Torres Strait Islander Creative Residency in 2017.

Can you tell us a bit about yourself and your artistic practice.

As a Darug person descended from the original people of this place, I want people to be more aware of the history and of the people who lived here before and whose stories are widely unknown. I  use my art to tell these local stories and to evoke a sense of social justice towards our people and also to help increase an environmental conscience to our land as we struggle to maintain a sense of custodianship.

I try to highlight our shared role in caring for country while conveying the intrinsic spiritual connection Aboriginal people have always had with this land.

What is your project for this residency?

Why did you focus on Nurragingy for this project?

Often in the greater Sydney region, names are given to various places, streets and suburbs with very little mentioned about the actual people from whom these names originated. Nurragingy Reserve is well known but little is known about the Eastern Creek Elder from which this name originated. I wanted to bring forth the human face and introduce people to this remarkable man.

Can you give us a brief history of the Darug people?

The Darug people were the first to feel the impact of the arrival of the British to Australia in 1778. Within three years of that landing, two-thirds of the Darug people were wiped out from disease (smallpox) along with ongoing skirmishes as they fought to defend their country. Despite their efforts, their homelands were stolen and taken over in a desperate land grab for farmland. The survivors of this invasion were then herded into reserves or placed in institutions in an attempt to ‘domesticate’ them. Today, the Darug are in recovery-mode, putting back together the broken pieces that came about from being dispossessed, and are working hard to be recognised and acknowledged in a land they have never left.

If you could give your younger self any advice what would it be?

Seize opportunities that arise. Don’t be afraid to ask the ‘dumb’ questions. All questions deserve answers and if we are fearful of being judged then we miss out on many learning opportunities. 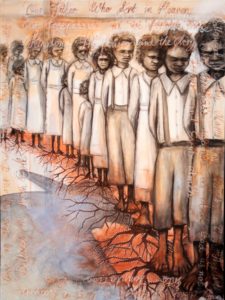 Images
From left: Leanne Tobin, Suffer the Little Children, 2012; Nurragingy and Colebee and the Native institute, 2009; Burbagana -Give Me Your Hand and I’ll Help you Up, 2015. Courtesy and copyright Leanne Tobin.

The Sunday Stir | Sydney Festival at the...