Abdul Hekmat is a photographer and freelance journalist who has written for The Australian, Sydney Morning Herald, The Age, the Guardian, The Saturday Paper and The Monthly. He is finalist for the Freelance Journalist of the Year Walkley Award 2018, and has been a finalist twice for the United Nations Media Peace Prize. He is also a PhD candidate at the University of Technology, Sydney, where he explores refugee lived experiences through art and narrative writings.

We invited Abdul to respond to our artistic program, Daneha (Seeds).

On 5 July this year, I went to the opening of Daneha, which means ‘seeds’ in English – a new exhibition at The Leo Kelly Blacktown Arts Centre about the refugee experience.

The gallery bustled with people, who streamed through its rooms, perusing the artwork whilst enjoying the Afghan cuisine: Basmati rice topped up with raisins, lamb curry and fried fish. In the gallery, an Afghan woman, dressed in traditional clothing, served the visitors with tea, candy, and kish-mish from a tea table. The performance studio was packed with people, listening to speeches and watching an Afghan girl perform a traditional dancing with traditional Afghan clothes to the rhythm of tabla and rubab; traditional Afghan music. 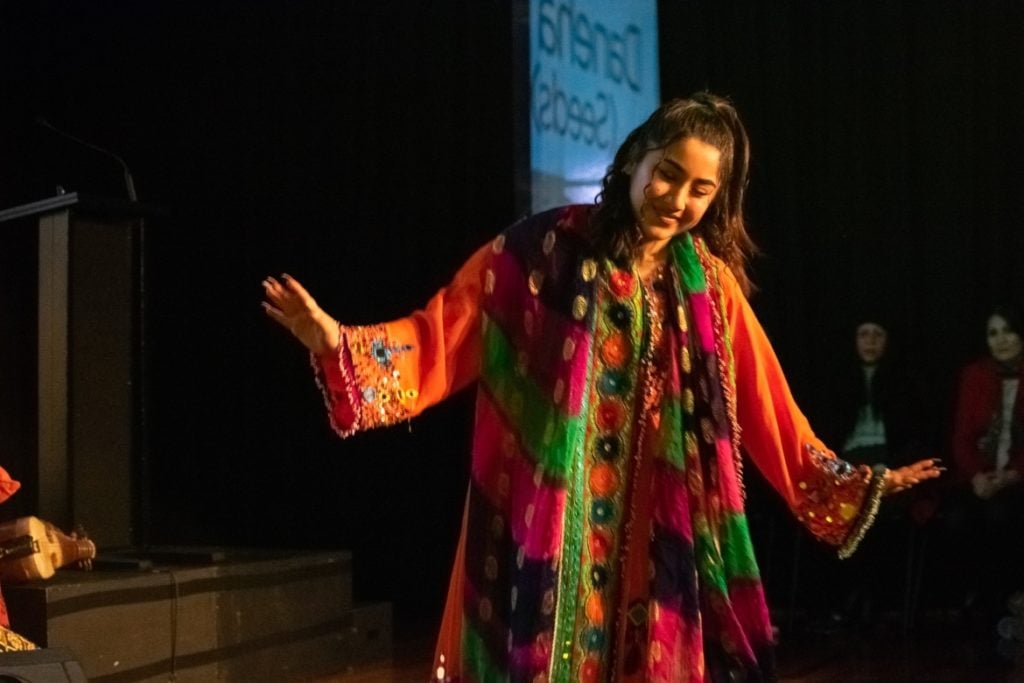 Curated by Paul Howard and Maria Mitar, the Daneha program includes painting, drawing, installation, portraiture, video and performances displayed across two galleries and a theatre. Daneha tells the story of refugees based in Blacktown, and indeed around the world, that are not just defined by experiences of horror and persecution, but which portray positive identities of empowerment and agency, chronicling how refugees find narrative and belonging through art.

For a period of two years, Blacktown Arts engaged the ‘Afghan Women on the Move’ group to create a number of installations and storytelling workshops. In the main gallery there are eight large black and white portraits of Afghan women, which were taken in collaboration with the photographer Gerrie Mifsud. They are evocative and exude with confidence but they only tell half the story.

When you read the captions, the resilience, courage and humanity of the sitter jumps out. One of the portraits shows Halima, an Afghan refugee who arrived in Australia five years ago.  Halima was fifteen when a bomb landed on her home in Afghanistan.  She was pregnant; she lost her baby as well as her left arm, along with eight members of her family. She still carries the shrapnel in her body.

‘I don’t want to be the victim of circumstance,’ the caption reads, ‘I have done everything myself, without a husband, a sister, or parents here in Australia.’ 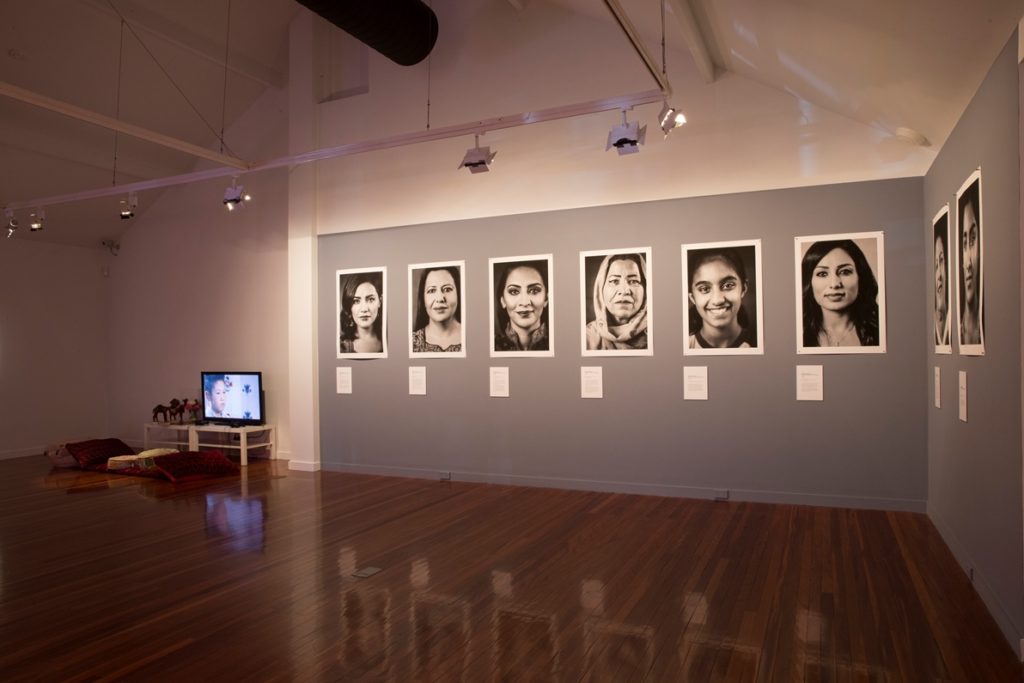 Halima’s story, like that of the other subjects, illustrates the experience of a refugee and a woman who despite having gone through horrific experiences emerges resilient. Her trauma does not shape her identity nor the course of her life.

Also featured in this body of work is a portrait of Maryam, the founder of ‘Afghan Women on the Move’, who established the group to provide a safe platform for Afghan women, for them to share their stories, food and dance.

‘I want to create a safe platform for the empowerment of women,’ she says. ‘The focus on arts and cultural gathering has been crucial to the success of the group that is outside of religious, political and community influences.’

Afghan women are often invisible and voiceless in Australia. They have been oppressed by the Taliban and still struggle for their existence in Afghanistan. Public outrages abound, such as the killing of Farkhunda, an Afghan woman who was dragged, run over by a car and killed in Kabul in 2015 by an angry mob who accused her of blasphemy.

Though freed from the shackles of tradition, the women who arrived as refugees in Australia still face surmounting challenges, learning the language, and navigating heavily traditional gender roles in Australia. ‘Many of them are confined in their homes and often can’t get out because of family restrictions’, Maryam says. Working with Maria Mitar, the Performance Curator at Blacktown Arts, and Paul Howard, the Visual Arts Curator, enabled them to share a public forum and gallery space. ‘Women’s voices are an integral part of the project,’ Paul said. ‘Our galleries and performance studio were transformed into spaces where women could talk, dance, pray and discuss how they wanted to collaborate.’

Images of refugees too often conjure up images of victimhood, helplessness and trauma. And whilst trauma and suffering are part of the refugee experience and deserve to be told, focusing on these things too much can thwart the language of empowerment.

Daneha highlights that refugees, and indeed women, cannot be defined only by the narrative of victimhood and loss. In the portraits, you see a community worker, a teacher, a mother, and a young woman who dreams of becoming a footballer and actor. They are not victims of circumstances but a testimony to the resilience of refugees, which is also the journey of humanity.

Elie Weseil, a survivor of the Holocaust, in his book Night narrates that: ‘We must never forget that we may also find meaning in life even when confronted with a hopeless situation, when facing a fate that cannot be changed. For what then matters, is to bear witness to the uniquely human potential at its best, which is to transform a personal tragedy into a triumph, to turn one’s predicament into a human achievement.’ 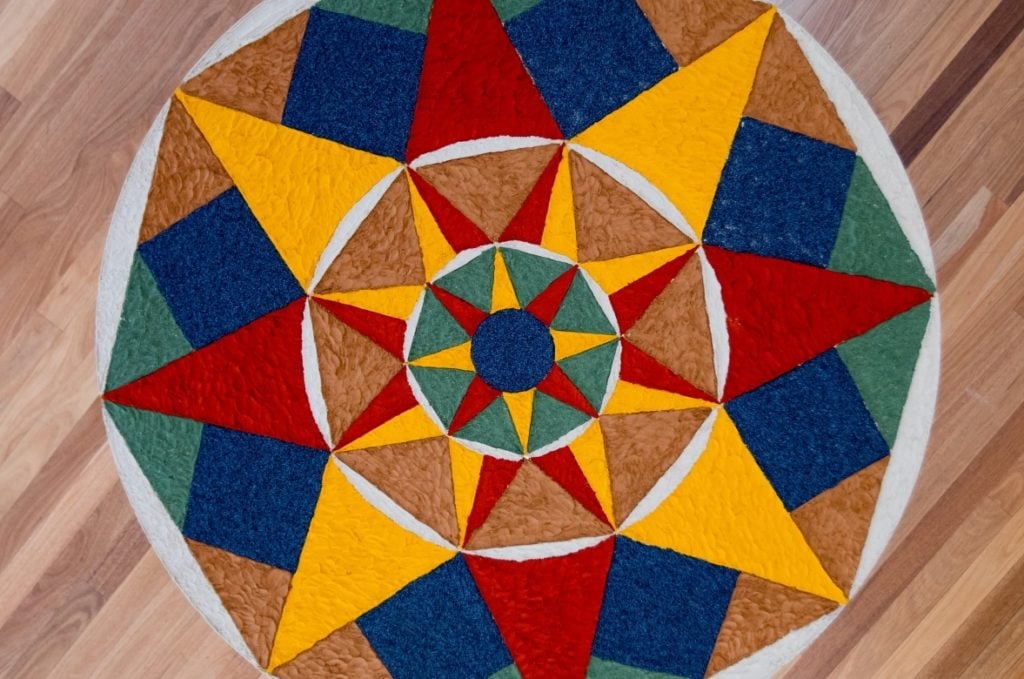 In Daneha, you see portraits of refugees, and an artist who transformed personal and community experiences into artwork.  In the center of the second gallery, Star Seed (2018), is a work by Nazanin Marashian, an Iranian born local artist, who created the work in collaboration with members of ‘Afghan Women on the Move’, to highlight the empowerment of women. Geometric shapes are filled with spices like turmeric, paprika, cardamom, cinnamon, dried herbs and poppy seeds, whose aroma fills the space. These spices are found in every Afghan home but are used here to create an artwork that speaks of empowerment, resilience and courage. The work takes the form of a compass, a symbol of how refugees navigate the complex system in Australia, and find direction and empowerment.

On the gallery wall is another artwork, Planting Seeds (2018), which captures the narrative and resilience of Afghan women through their words and symbols. It features about 300 disks, some as small as coins. Nazanin also created this work with members of ‘Afghan Women on the Move’, although the women maintained creative control of the work. Each disk bears the work of each creator. There are symbols and words written in Farsi, such as life, wish, love, freedom, and smiley signs. ‘This work reflects our vision for a future life in Australia,’ one member of ‘Afghan Women on the Move’ had said.

Trauma is present in the story of each woman. ‘Trauma is real and I live it every day,’ Maryam says. However, these women want to move beyond trauma and loss, and not be shaped by it.  Daneha is a fine example of artists working closely with community, showing how the arts can empower traumatized people and offer hope, empowerment and resilience, all of which are often missing in the current debate about refugees in Australia and indeed around the world.

‘In all my 14 years of living in Blacktown, this is the first time I have been invited out on my own and been able to participate. This kind of thing never happens to women in our community,’ said one participant.

‘One Dance at a Time’ excerpt | Maryam Zahid