“In any civilised community the arts and associated amenities must occupy a central place. Their enjoyment should not be seen as something remote from everyday life.”

And so it is that we are here today to honour the life and legacy of another great champion of the arts, Leo Kelly.

However, I believe that Leo Kelly took the Gospel of Gough an important step further.

“…all the other objectives of a Labor Government – social reform, justice and equity in the provision of welfare services and educational opportunities – have as their goal the creation of a society in which the arts and the appreciation of spiritual and intellectual values can flourish. Our other objectives are all means to an end; the enjoyment of the arts is an end in itself.”

But to Leo Kelly, the promotion and stature of the arts in Blacktown, and in Western Sydney generally, was so much more.  It was a statement about the calibre and creativity of our people; it was a direct and indirect economic driver; and it set a new level of aspiration in the civic narrative about the type of community we wanted to be.

Leo was a great admirer of the local indigenous artist and elder, Danny Eastwood.  He delighted in recounting how the stunning piece, “Billabong” by Warwick Fuller, came to be hanging in Council’s Porirua Room, having been acquired though the 1997 Blacktown City Art Exhibition. 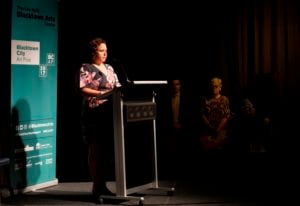 Of all the events in the Council calendar, my observation is that this Art Prize, this annual exhibition, this arts centre, was the one Leo held in the highest regard.  Leo was an engaging commentator.  He savoured the aesthetics of the works, his breadth of knowledge of the individual artists was astounding, but – most of all – I believe his joy in the journey that led to this space and this initiative was due to the passion he felt for it with the love of his life, Janet.

Janet, the honour the City of Blacktown bestows upon Leo today is equally conferred on you.

Leo was an ardent admirer of another great champion of both Western Sydney and the arts, Neville Wran.  There is a charming serendipity today in one of Wran’s many epic putdowns of his opponents.  During the 1981 election campaign, Wran ridiculed the Conservatives’ economic agenda saying:

“Man does not live by bread alone. I suppose we should pull down the Art Gallery and convert it into a carpark!”

For of course, a carpark is exactly where we would be standing if not for the fortitude and expertise of Leo Kelly.

The Emperor Augustus inscribed his accomplishments for eternity in the Res Gestae Divi Augusti – The Achievements of the Divine Augustus, a political and public relations masterstroke about all his works in and for Rome that cemented his legacy for the ages.

The naming of the Blacktown Arts Centre in honour of Leo Kelly will have the same effect, but for precisely the opposite reasons.  It is a statement about how a humble man of vision and fervour pursued a course he thought was right, against what must have sometimes seemed like insurmountable opposition – for the love of the arts, the betterment of staff of the Council, the people of Blacktown, and everyone that would follow him.

Thank you very much for this kind opportunity to share a few thoughts on this occasion of the 2017 Blacktown City Art Prize.

The Blacktown City Art Prize is a much anticipated cultural event each year in Blacktown.

In 1996, a small group of enthusiastic, local artists – known as the Arts Reference Group – got together and decided that Blacktown needed an art prize. Our previous Mayor of Blacktown City and Councillor, Leo Kelly OAM, led that group for almost every year until his passing earlier this year.

From these modest beginnings, the Art Prize exhibition has grown in scale and prestige to become one of the most prominent art prizes in New South Wales.

The growth of Blacktown Art Prize has mirrored the growth and development of contemporary arts and culture, not just in Blacktown, but across the Western Sydney region.

This is a chance for local artists to exhibit alongside artists from across Australia. Well done to the local artists from the Blacktown area, and across the wider Western Sydney region, whose works have succeeded in making it into this exhibition.

In addition to the main Blacktown City Art Prize, and to honour the excellent work of our local artists, we continue to offer the Local Artist Prize each year.

We also continue to offer the Aboriginal Artist Prize as part of our work to support and nurture the development of contemporary Aboriginal artists’ work.

And the Peoples’ Choice Prize – which I encourage you all to vote in – is recognised not just for the quality of the winning artist’s work, but the vital role that visitors have in talking about the value of contemporary art and its many new forms and ideas.

One of the roles of contemporary art is to challenge viewers as well as delight them, and every year the Blacktown City Art Prize and the year-long program here at the Arts Centre does exactly that, and it generates stimulating conversations on the merits and values of artists’ work.

And let’s not forget the independent judging panel this year, whose hard work and commitment through viewing and deliberating over 600 artworks, has resulted in the exhibition of 93 finalists and the winning works.

Today is, to the day, my 40th anniversary in service of local government. The irony is that on that day 2 December 1977 I commenced as junior clerk at Blacktown City Council. This building in which we gather this afternoon was the Church of England – Blacktown. It was in this building over following years I bid farewell to my grandparents and my father, and also in October 1981I married the love of my life. My grandfather was the Minister’s Warden when this was a church for 40 years.

I am so very honoured and privileged to be asked to provide this oratory today where we honour my mate Leo Kelly, OAM.

Leo Kelly had an unwavering passion for the arts, and a belief in the value of the arts in enriching all our lives. He wanted to encourage local artistic talent, and his ethos was that the western suburbs of Sydney should have equitable access for its citizens in recognition of their desire to participate in, view and enjoy art and culture in all its forms.  He was however, on occasion, in the most private of company known to say,

“…well that bloody painting is not my cup of tea but seemingly every other bugger around here that knows anything (or pretends to know anything) about art seems to think it’s a ripper so I suppose we better buy it.”

Leo overcame strong opposition to the plan for an arts centre on its current site. He argued that his opponents had no alternative use for it and just wanted to sell it as a car park. But Leo had the foresight to recognise that the people of Blacktown deserved a high-value centre of arts excellence.

For those who attended Leo’s funeral you may recall in his eulogy I spoke of having first-hand knowledge of where this plan was hatched which was over a few beers at Wrestpoint Casino, Hobart, when Leo had  established my strong connection to this building and my desire to have it preserved in whatever capacity. Whilst I will not be so foolhardy as to suggest that this was the only reason, I would like to think that it resonated with him amongst all of the deliberations.

Here I should also acknowledge the work of Janet Kelly, who worked alongside Leo for many years, championing the arts, and artists of Blacktown. I am delighted that Janet and her family could join with us today. For those who know the family they will be filled with great pride at what is occurring here today.

Leo is sorely missed by many of us, and this is a fitting and lasting tribute to a champion of the arts here in Blacktown.

Tess Mehonoshen from Brisbane was awarded the prize for Measuring Loss, a thoughtful and tactile sculpture made of cement, clay, iron oxide and fabric.

The judges referred to the winning artwork as ‘slow release’ and said “the longer we spent with the work the more it touched on various subjects such as environmental destruction, death, the Holocaust, and loss of health due to mining,” they said in their judging report.

Highly Commended were Carol Ann Fitzgerald for Landscape and Memory – Wiradjuri Country, and Minka Gillian for Pink Outburst – A Self Portrait.

Kristone Capistrano of Rooty Hill was awarded the Local Artist Prize for Breath, an arresting yet optimistic depiction of a newborn baby.

The judges said “the work was technically proficient, went beyond grace, and pointed to the future of multiculturalism in Blacktown”.

First prize in the Aboriginal Artist category was Naomi Grant for Dad’s Country.

Highly Commended was Peter Hinton for Quality of a Few Minutes #1 and 2 – A Study on Whitlam.

The judges were very impressed with the overall standard of entries which included nationally recognised artists alongside emerging local artists.

Highly Commended
Peter Hinton, Quality of a Few Minutes #1 and 2 – A Study on Whitlam, 2017