Artworks can be made in all shapes and sizes!

Watch this fun video by Susie from Handy With Scissors and make your own cardboard caravan inspired by Brook Andrew’s artwork Travelling Colony.

For his artwork, Brook painted a series of caravans with radial diamond patterns that are important symbols in Wiradjuri culture. 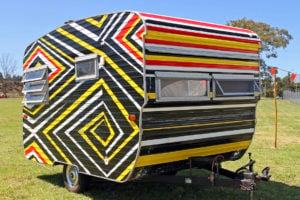 It is a multi-faceted artwork that compels audiences to see issues of race, consumerism and history in different ways.

Brook’s artwork is part of the Blacktown City Art Collection, and is on display in the carpark of The Leo Kelly Blacktown Arts Centre, Tuesday – Saturday, 10 am – 5 pm.

On a busy intersection in Oakhurst, where Rooty Hill Road North meets Richmond Road, a bare site is protected by cyclone fencing and a small lock. Beyond the grassy surrounds the landscape is typical of Western Sydney’s growing urban sprawl. On the gate is an official “No Trespassing” sign in bold red. Most locals are unaware that within the parameters of the fenced off area lies the foundations of The Blacktown Native Institution.  Established in the 1820s, it is one of the first known sites where Aboriginal children were removed from their parents and institutionalised – a practice that continued until the 1970s.

A component of the project was a series of interventions on the actual site entitled Sites of Experimentation, where the artists responded to the space based on their collective research, and the imagined lives of its past inhabitants.

The Blacktown Native Institution site continues to be activated as part of the C3West partnership, a collaboration between Blacktown Arts Centre on behalf of Blacktown City Council, the Museum of Contemporary Art Australia and UrbanGrowth NSW.

The room sheet featured below unpacks the works from the 2013 exhibition.

Visit the BNI Project website for more information on the site, the project, and future events.