Made in Blacktown is a program of new temporary public art by diverse western Sydney talent, which invites you to walk through our City, celebrating place and the creative energy of local artists and the community.

Be inspired by some of western Sydney’s most dynamic artists as Blacktown Arts and Blacktown City Council present Made in Blacktown; a temporary public art takeover of the Blacktown CBD.

Made in Blacktown showcases the heart of the Blacktown creative scene with digital art on outdoor screens, large-scale installations, participatory street art and graffiti workshops and a public art map to bring it all together.

Featuring works by Emily Johnson, Coda Jade, Western Sydney Murals, Kevin Vo and Leila Frijat, Made in Blacktown reimagines how art can transform our city, making culture a part of our everyday lives. 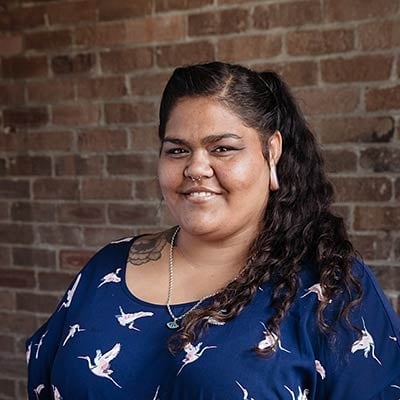 Bilyara, Carefree, Contemplative, Peace, Flava, Always Was Always Will Be

Emily Johnson is a 28 year old Barkindi. Latiilati. Wakka Wakka and Biri Gubba woman originally from Broken Hill, living and working in Sydney on Gadigal country She is also a visual artist and online content creator on Instagram as @darthem123 and TikTok handle @howdoidelete1

As part of Magnify Emily Johnson created six larger than life-sized characters [superheros] exploring body positive imaging, feminism and First Nations identity. For Made in Blacktown, these superheros meet the people of Blacktown in unexpected sites around the CBD.

“My work empowers young women to not have to fit into a stereotype, not feeling like they have to be pigeon holed. It’s about connection and belonging no matter what you look like.“
– Emily Johnson 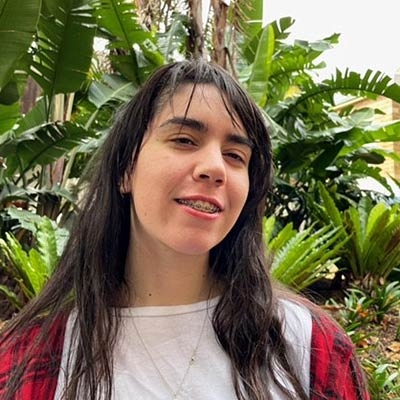 How The Birds Got Their Colours
The Waterholes at Douglas Daly, Dunbi,
2 untitled works

Coda Jade is a young, First Nations artist who was born in Windsor on Darug land. Her mob is Goreng Goreng, near Bundaberg, Queensland. She grew up in Blacktown and is currently studying a Bachelor of Fine Arts in Sydney. Coda has received scholarships from the GO Foundation, JB Fairfax and the National Art School and her works will be featured in Vivid Sydney 2022

Coda Jade’s work was inspired by traditional knowledge of the Bardi people of Western Australia in a book called How The Birds Got Their Colours, told by Mary Albert and compiled by Pamela Lofts. It is also inspired by the Worora people of Western Australia as reflected in a book called Dunbi The Owl, told by Daisy Utemorrah and also compiled by Pamela Lofts. 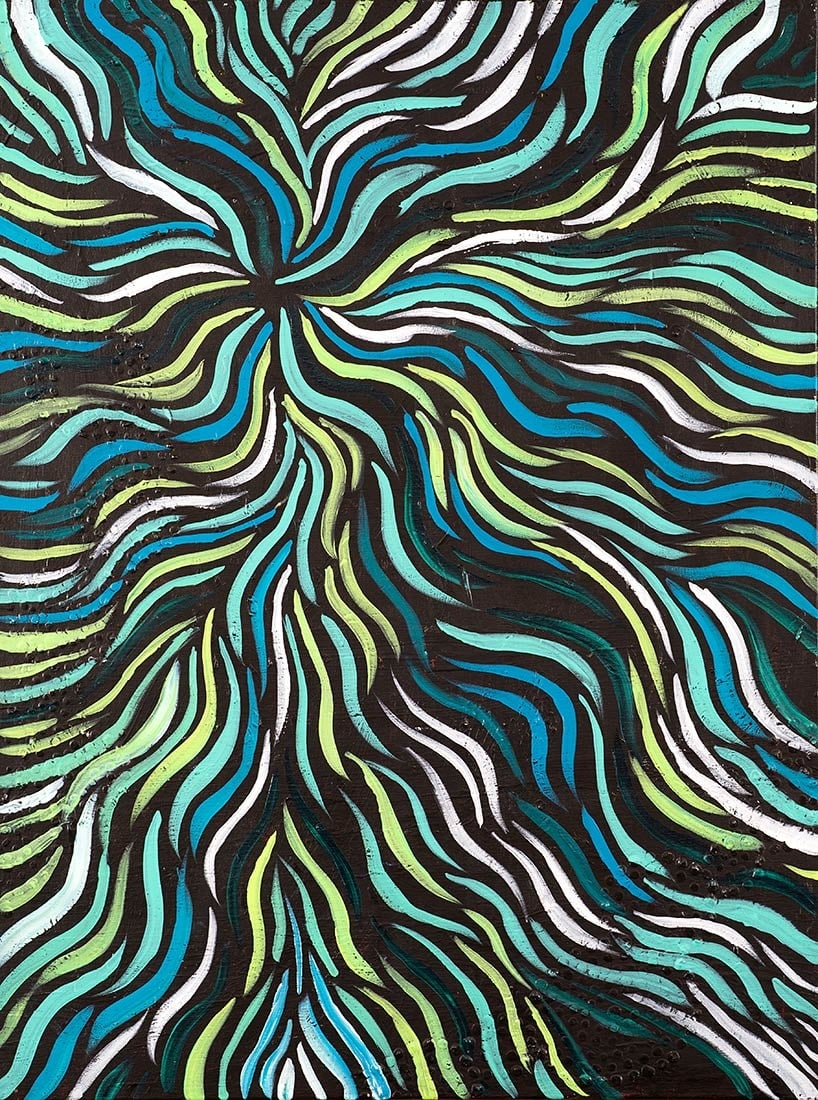 How The Birds Got Their Colours, (Series 5 of 6)

Two days of drop-in street art workshops for young people by some of the talented artists behind Western Sydney Murals.

Try techniques with aerosols, paint markers and stencils as Cam and Paul take participants through a series of workshops.

Take home your own small work while contributing to a collaborative mural that will come to life over two days. The final piece will be displayed in Blacktown CBD on 30 April.

Note: Graffiti workshops are drop-in only. No bookings required.
Please bring clothes to paint in.

Western Sydney Murals
Western Sydney Murals is a collective of artists from Western Sydney, producing large scale murals, commissioned works and community workshops. With each artist having over a decade of experience under their belt, they specialize in a variety of styles from portraits, custom lettering, landscapes and characters.

Cameron Marbus
Cameron Marbus is an artist and founder of Aerosol Obsessions. Cameron was raised in Riverstone and currently teaches signage and design at TAFE Western Sydney. He has over 10 years’ experience working with urban street art and was recently commissioned by Blacktown City Council to create a mural for Riverstone Youth Precinct.

Paul Zoeller
Originally from Western Sydney, Paul Zoeller is a graphic designer, illustrator and artist specializing in print, digital, branding, illustration, textiles and web design. Paul’s professional achievements include wining the WOOF Art Prize in 2015, placing as a finalist in the Hawkesbury Art Prize (2015) and his artworks have appeared in magazines such as Australian Mining Review. The Poster Centre School Holiday Workshop Program – Blacktown Arts is a mobile screen-printing studio where families and young people can learn screen-printing techniques in the tradition of political poster art pioneered in Mt Druitt by the Garage Graphix.

For Made in Blacktown, catch a selection of posters displayed in the CBD before taking part in a workshop and checking out the Garage Graphic exhibition at The Leo Kelly Blacktown Arts Centre. 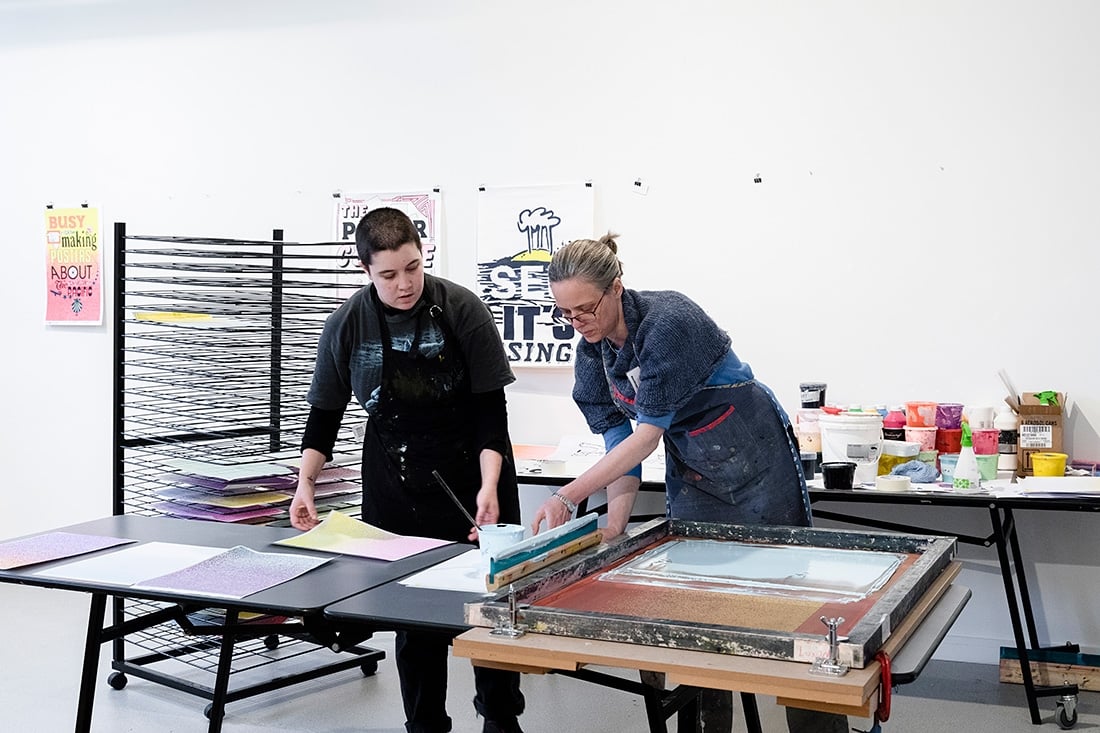 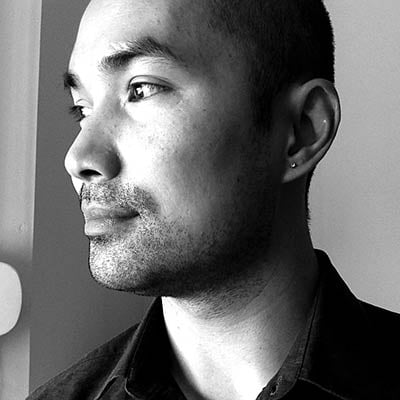 Kevin Vo has created the Blacktown City Art Map which includes a custom artwork on the reverse side of select editions.

Born in Vietnam, Kevin came to Australia in 1985 as a refugee. He has studied Graphic Design at the Sydney Institute of Technology, Enmore Design Centre and is currently working in graphic design and visual arts.
Kevin has successfully exhibited his work throughout western Sydney, including the Casula Powerhouse and Liverpool Region Museum and has completed various public art projects for Fairfield City Council, Bankstown City Council and Sydney City Council. The Heart of Blacktown

The Heart of Blacktown illustration also appears on the reverse side of select editions of Blacktown City Art Walk Map.
Limited copies are available from The Leo Kelly Blacktown Arts Centre.

Leila is a multidisciplinary designer and artist that works across graphics, illustration, interactive installations, photography, and videography. Exhibitions of Leila’s work have been held at Pari Gallery, Gaffa Gallery, and Kudos Gallery and her work has been published in several publications. 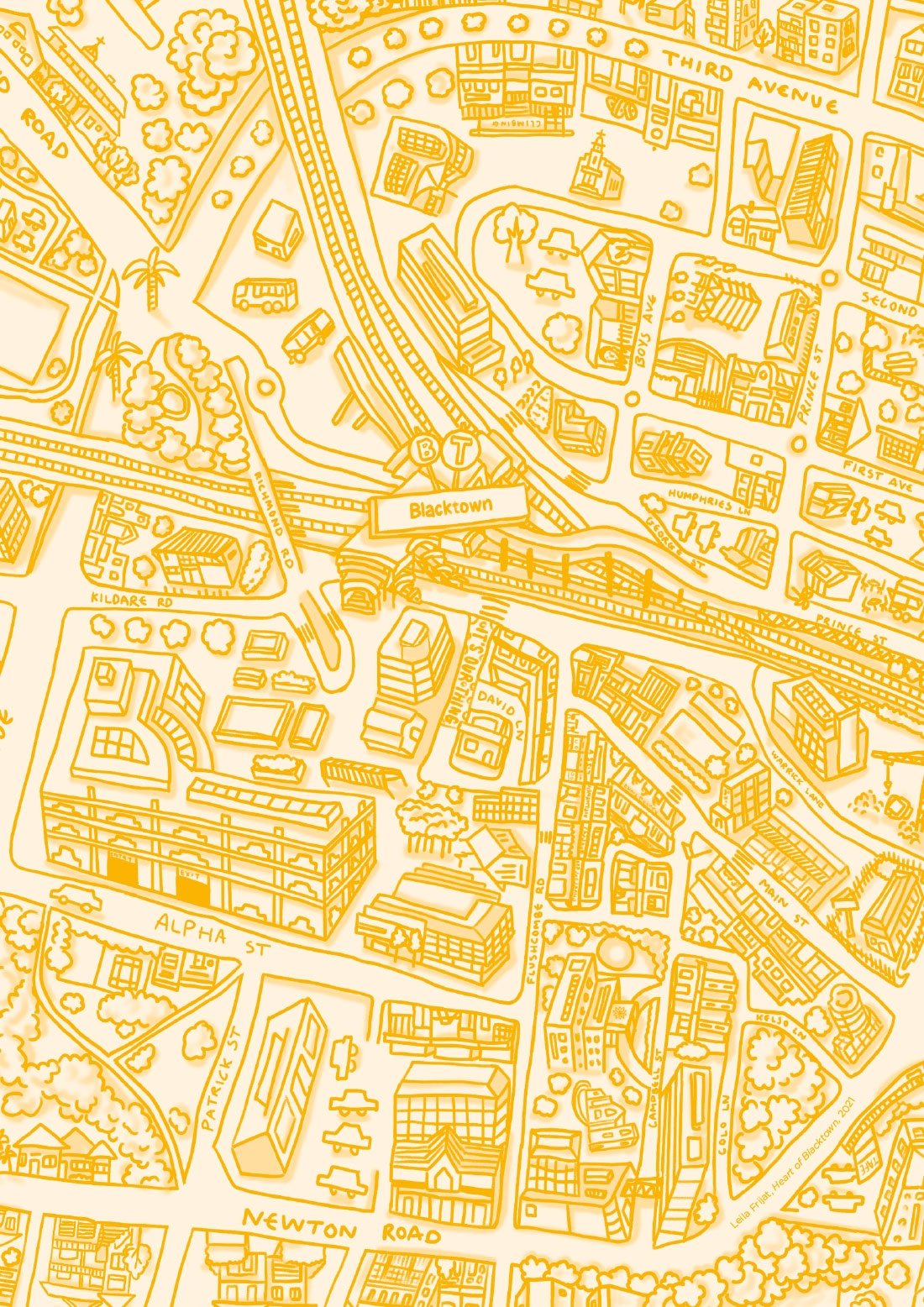 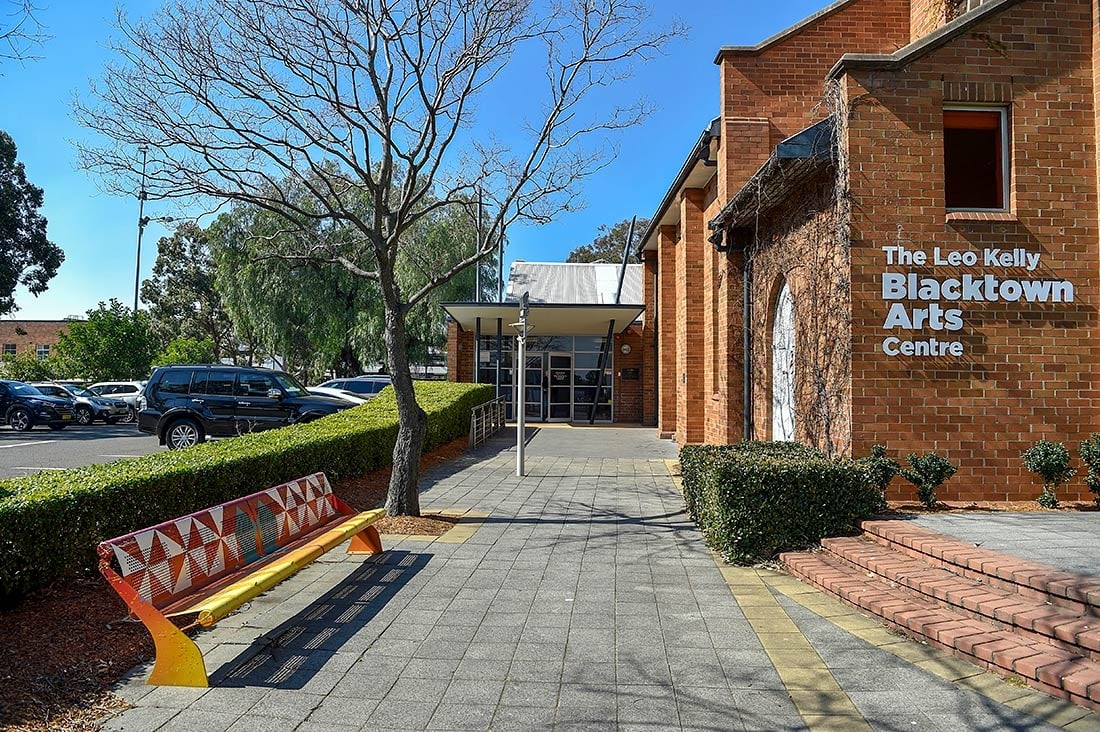 Is a great place to start your City Art Walk. The Leo Kelly Blacktown Arts Centre is an innovative multi-arts hub located in the heart of Blacktown. Exhibits are on display from 10am – 5pm Tuesdays to Saturdays. Entry is Free. 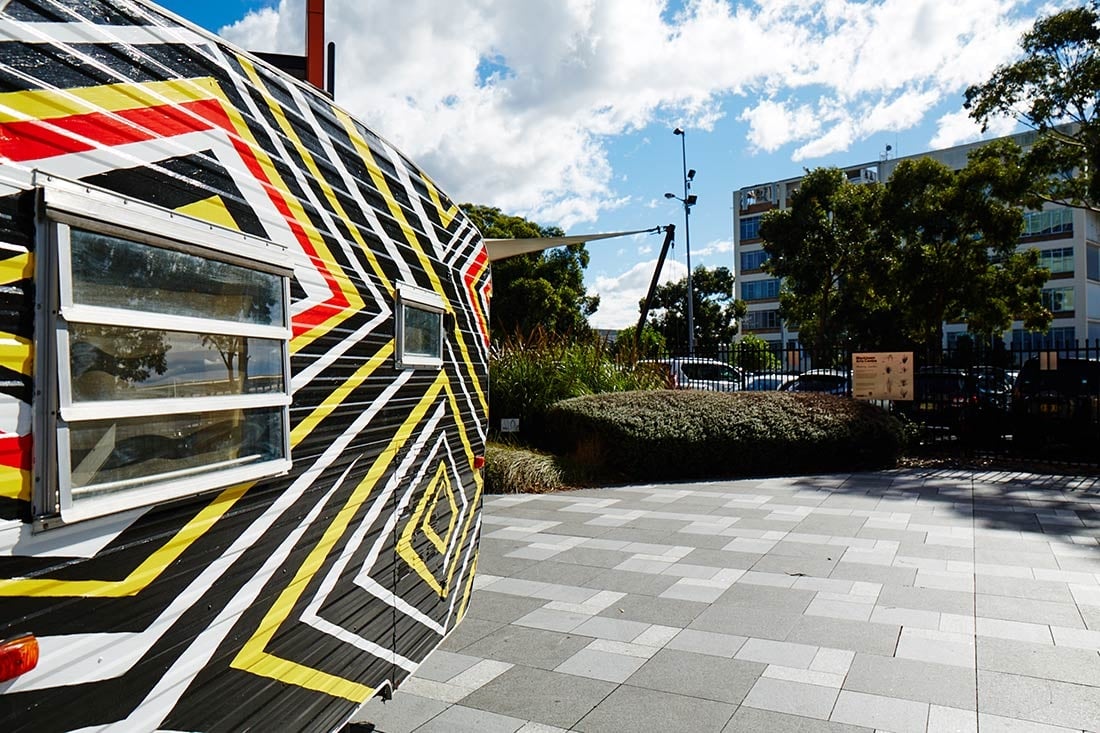 Located in the carpark of The Leo Kelly Blacktown Art Centre, Travelling Colony is a major new work by Brook Andrew, whose interdisciplinary arts practice travels internationally. For two decades this celebrated artist has been creating astonishing interventions into history through installation and interactive monuments, playfully seducing audiences into new ways of seeing compelling issues of race, consumerism and history. Inspired by his Wiradjuri tradition, the circus and pop culture, here he has created a dazzling hand-painted caravan. 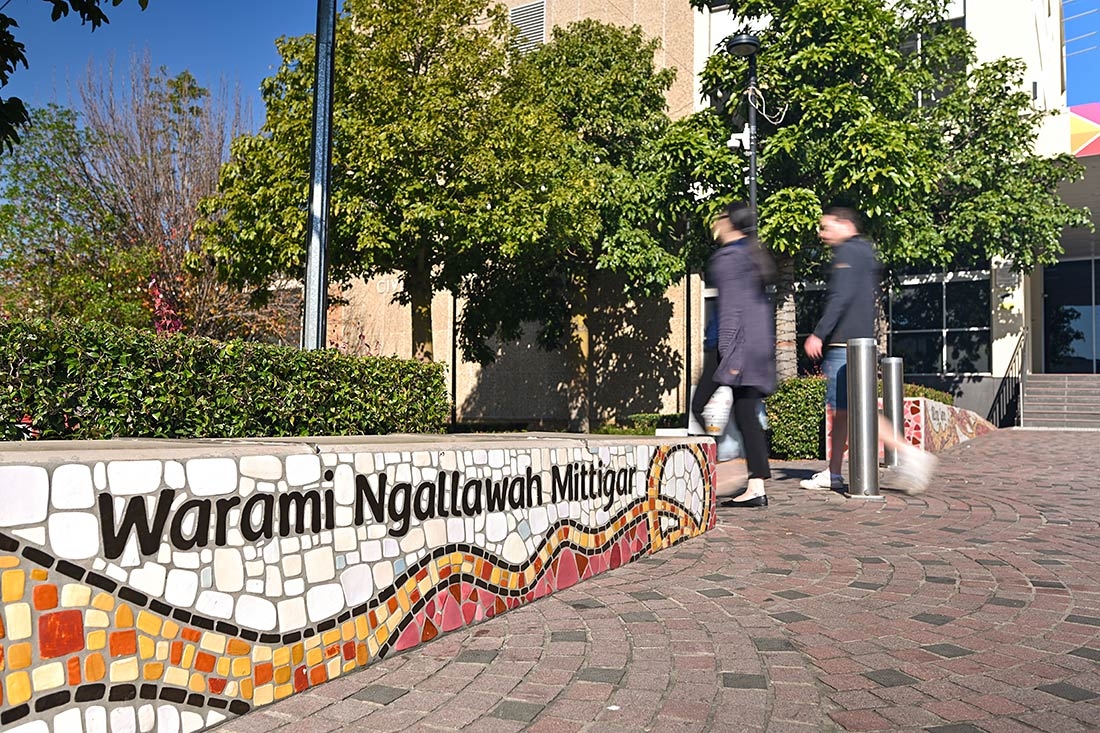 Visual artist, Nerine Martini with Darug artist Robyn Caughlan and mosaic artist, Tracie Bertram have brought the poem to life with entry statement mosaic walls, ponds and bronze sculptures. The Village Green is located next to Council’s Civic Centre and is accessible via Flushcombe Road and Campbell Street. Located in Mackenzie Walkway, adjacent to the Flushcombe Road entrance to Westpoint, sits City Shift by Tina Barahanos and Alex Byrne, BarahanosByrne commissioned by Blacktown City Council for It’s Our Thing 3. This sculptural piece was inspired by the music, performance and collaborative practices of the hip-hop movement of western Sydney. 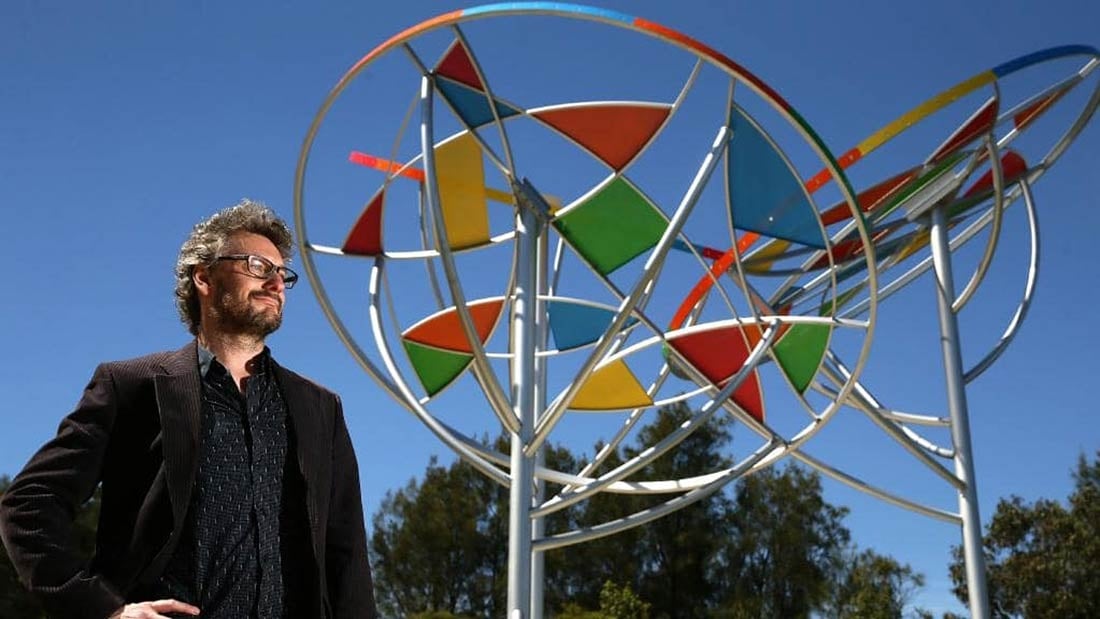 Located on the corner of Balmoral Street and Richmond Road, Graham Chalcroft’s Kaleidosculpture Velocity Wheel captures the fun, excitement and movement associated with showgrounds. The bold colours reference the ribbons awarded at agricultural shows and the multi-coloured LED lights embedded in the sculpture evoke the bright lights of amusement rides. Located in Blackground Showground adjacent to the Basketball courts. The Wreath by Bronwyn Berman is a memorial to workers lost, this sculpture sits amongst the reeds as an ancient symbol of life and death. The wreath’s circle represents unity, infinity and perfection and the nest-like shape represents home and family left behind. 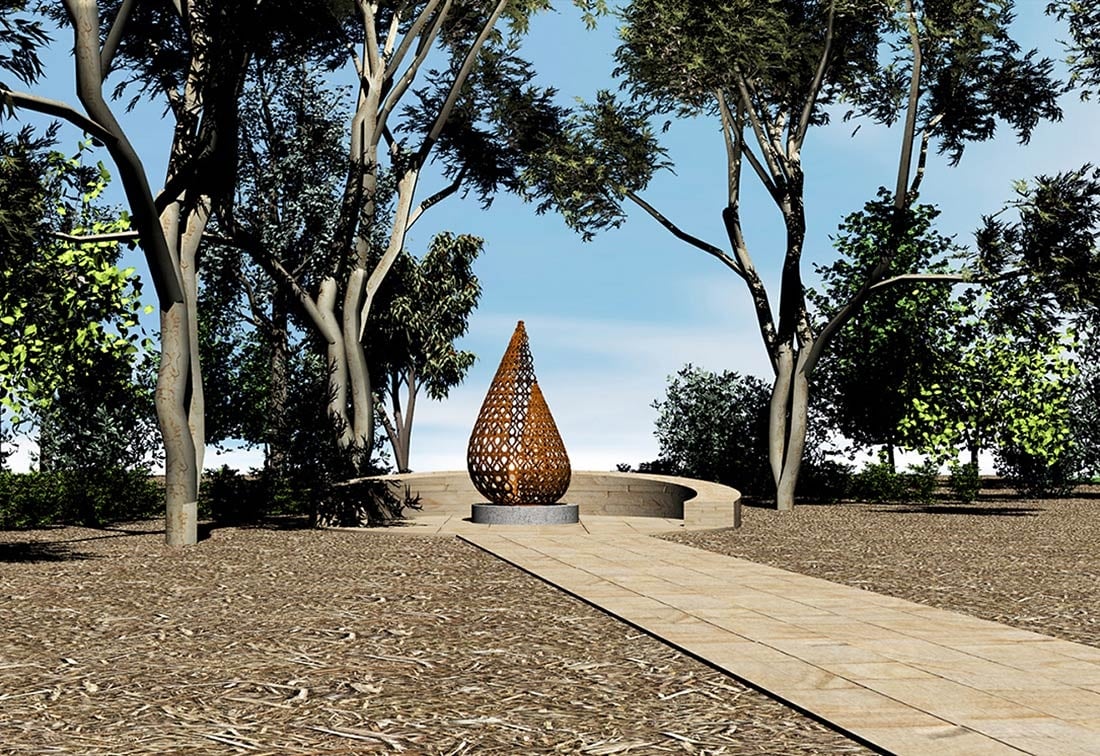 Located in Blacktown Showground adjacent to the Basketball courts, Contemplate by Yu Fang Chi explores the form of water waves, ripples and the movement and impact of a droplet falling on the surface of water. Inspired by the transient moment of water, the work utilises the simple curved shape of a drop as the key element of the sculpture to capture and reveal the idea of transition, comtemplation and healing. Light Wing by Skunk Control, an 8m tall reflective sculpture inspired by the partitioned wings of a local species of dragonfly, adorns the façade of the new Warrick Lane building. By day, the artwork uses optical technology, to reflect and transmit sunlight from diverse vantage points. By night, white LEDs project light through the optical filters in the sculpture, imitating light’s interaction with natural structures, like the wings of dragonflies, to produce an ever-changing kaleidoscope of colour. DADU BAMUL – Under the ground (earth) by Blak Douglas is a series of painted figures and animals spanning the Warrick Lane carpark and serves as a unique wayfinding system. Visible from the glass stairwell from street level in the Warrick Lane precinct. 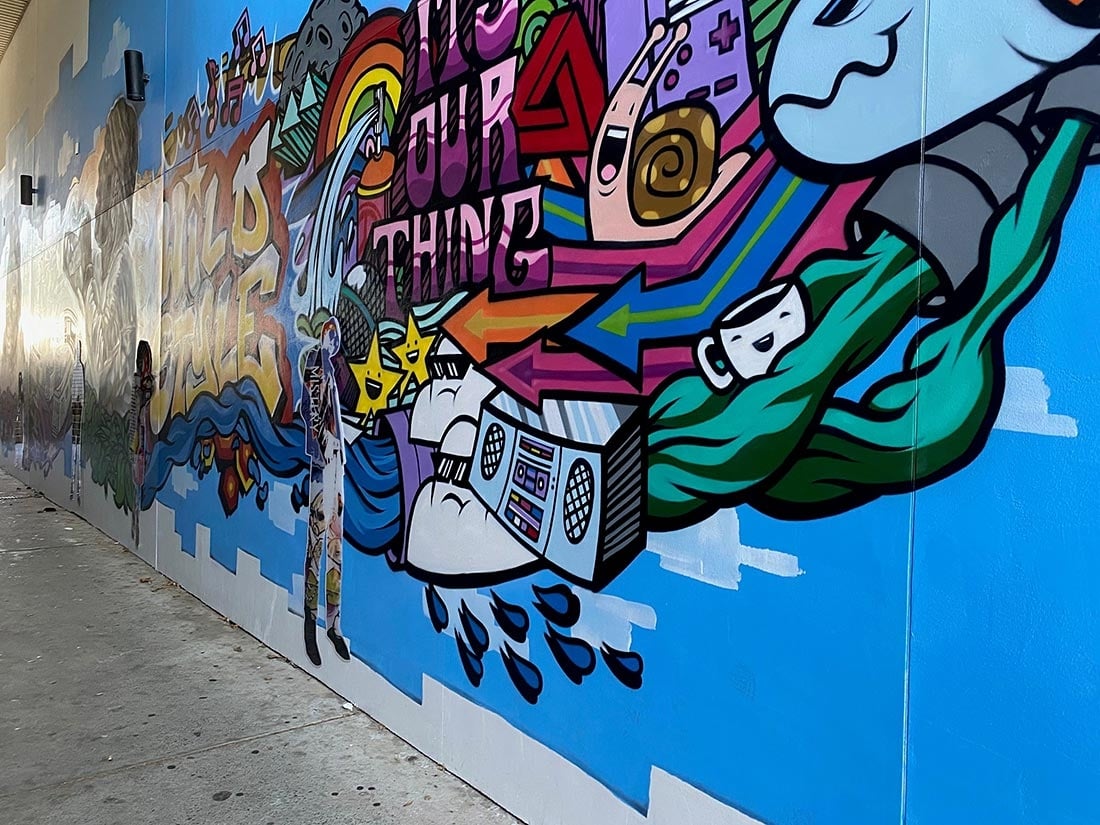 Street Cycle is inspired by the hip-hop movement in western Sydney and is a striking example of the technique of layering with street art. The project is part of Council’s Graffiti Management strategy in partnership with Blacktown Arts to undertake and legitimise street art within the city and turn laneways into engaging and creative spaces for the community.

The Blacktown City Art Walk encourages visitors to take a stroll around the CBD and discover our temporary and permanent public artworks.