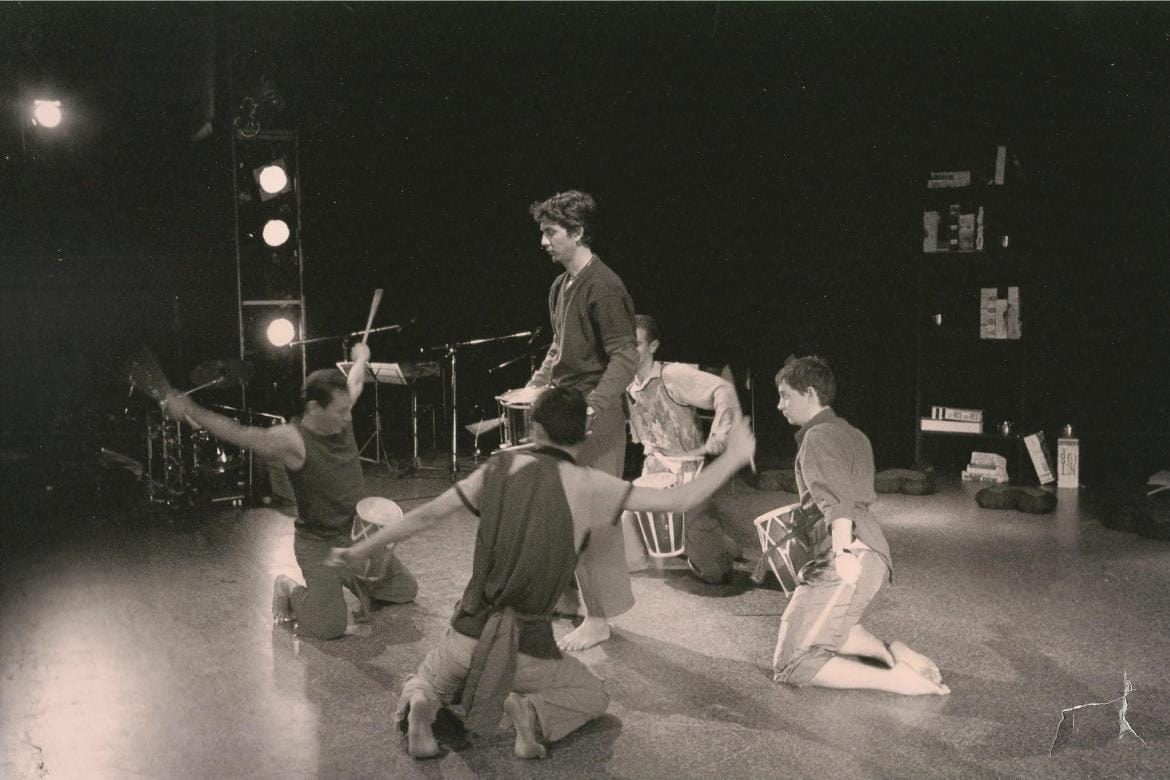 Before Binh Duy Ta begins his series of Mindful Movements workshops with Blacktown Arts, learn more about the artist and what to expect from his workshops.

Binh Duy Ta has a wealth of experience working in theatre and performing arts. He began his career in Vietnam before migrating to Sydney in 1988. He has written, directed and performed in award winning theatre across Australia and toured internationally.

What drew you to working in performance?

I don’t remember what drew me to working in theatre and performance. I just remember that I learnt music first. I had a band when I was about 16 years old. We played Western pop songs: from The Beatles, Bee Gees and the Eagles. After that, I auditioned for the first and only Pantomime Course in Hanoi, Vietnam.

I studied for three and half years, then worked as performer, director and writer for The National Theatre Company for Young People in Hanoi before I came to Australia in 1988 to attend Interplay 88’ – The International Young Playwrights Festival at Sydney Seymour Centre.

How long have you been working in Kung Fu and Qigong (pronounced Chi-gong)?

I started learning kung fu  at theatre school in Vietnam, but I didn’t take it seriously. I’ve spent more time with kung fu since 1996.

I studied Qigong under master Chen Yong Fa and sifu John K Saw since the year 2000.

I learnt Choy Lee Fut Kung Fu and Qigong for about ten years, and in the last three years I have been learning Wing Chun Kung Fu at Dereck Fung Wing Chun with sifu Mike Tran.

What drew you to combine Kung Fu and performing arts techniques together?

In 1992, I toured with Entr’acte Theatre to Indonesia where I met the poet, playwright and director WS Rendra and his Bengkel Theatre. I was so impressed with their powerful integration of martial arts and performance. I went back to Indonesia in 1994 to study, and I undertook a cultural exchange with WS Rendra and Bengkel Teatre. Since then I have incorporated kung fu and martial arts in my performance and teaching.

Throughout 2019 you’ll be facilitating separate movement workshops for young people and seniors. What can participants expect from the youth classes?

Aimed at 12-17 year olds, this class will focus on kung fu and self-defence, fitness, movement and improvisation. This method incorporates principles of both performing arts and martial arts to emphasise energy, movement, self-defence, sensitivity, and creativity. These classes will lay a strong foundation for developing and guiding participants to create their own stories and performance styles.

What can participants expect from the seniors classes?

Through methods of Qigong, fitness, stretching, self-care and meditation will be the main elements for the classes. Improvisation and storytelling could be added to the sessions to encourage participants to share their own stories through Qigong movements and meditation.

What are the benefits of Qigong and meditation for seniors and as we age?

There are so many benefits of regular Qigong exercise and meditation for seniors. For starters, it can help improve mental health and help to improve our social interactions. It can also help with building and maintaining healthy bones, muscles and joints, reducing the risks of injuries from falls. 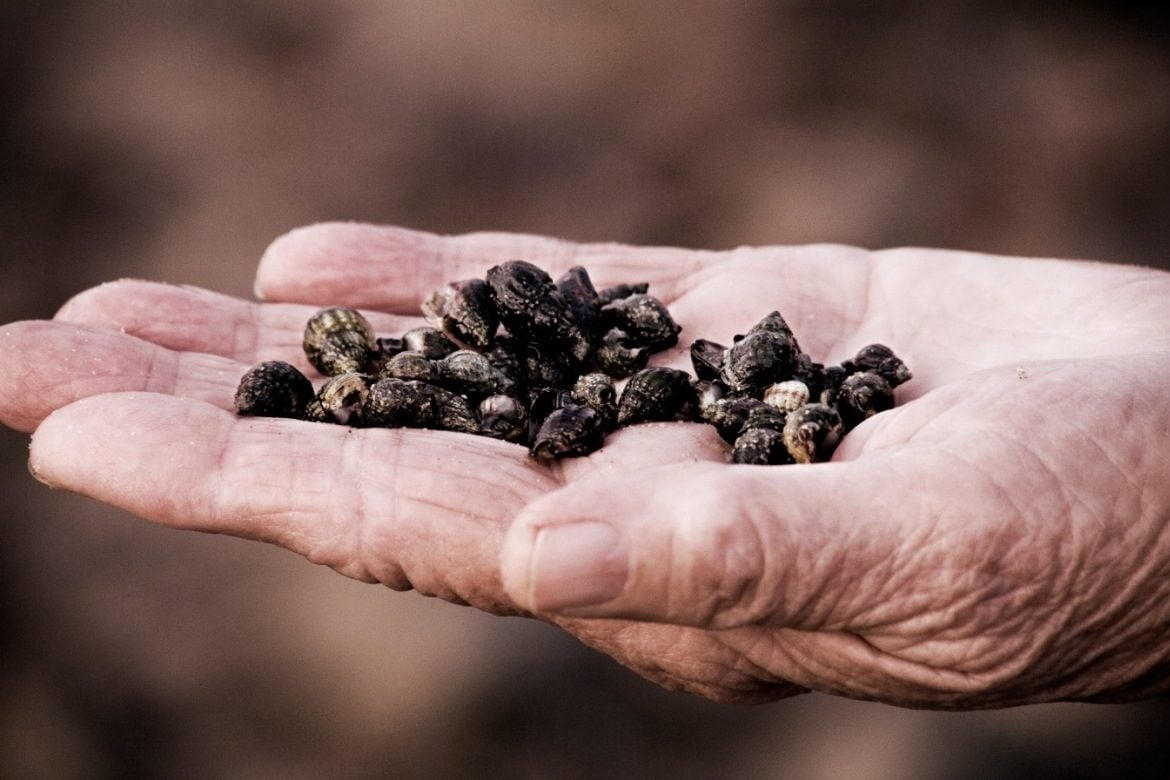 From 22 February – 20 April 2019 Blacktown Arts will present kanalaritja: An Unbroken String – an exhibition and series of workshops that celebrates the generations of makers who have sustained the uniquely Tasmanian Aboriginal cultural practice of making rare and delicate shell necklaces.

Watch this short film to learn more about the project that culminated in this upcoming touring exhibition from Tasmanian Museum and Art Gallery.

Watch the video online at SBS on Demand 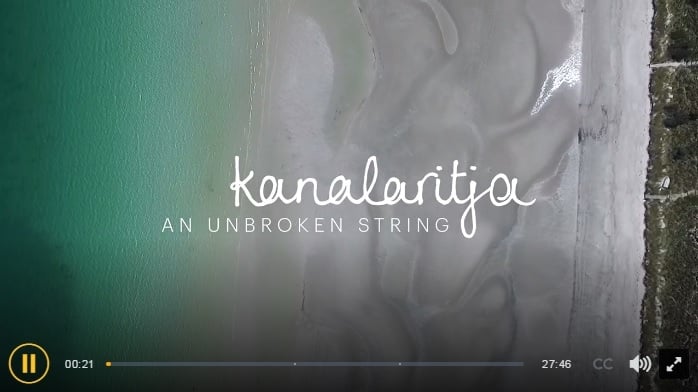 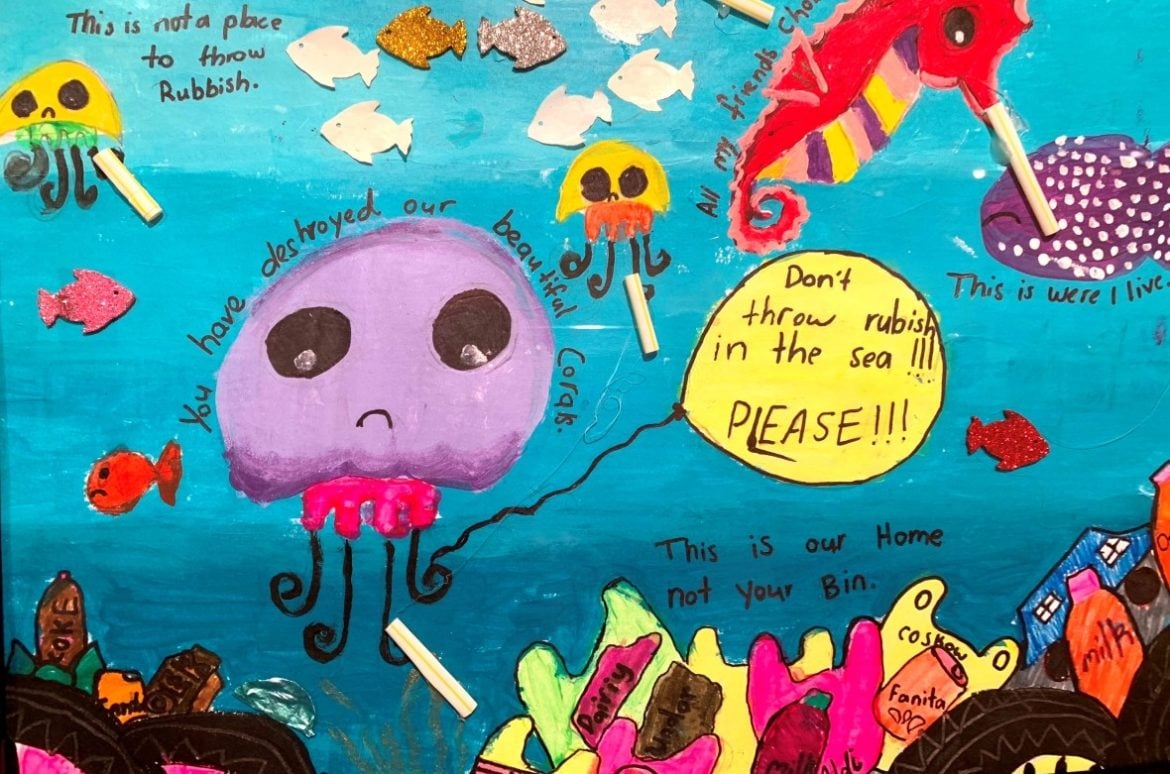 What can we do to say “bye bye” to plastics?

Each year, the Blacktown City Art Prize celebrates the creativity of local young people through an environmentally-themed Young Artists Prize.

In 2018, participants were asked to consider what we can do to say “bye bye” to plastics and save our marine life.

Every young artist came up with their own ideas and solutions to these environmental issues. Read the ideas behind some of the winning artworks below.

“My artwork is about fish and other animals living in their beautiful home and how we don’t want the trash to be in there… rubbish needs to be in a safe place not in the animal’s home” – Shlok Soni, age 6

“My artwork is a message telling people to not throw rubbish into the sea because rubbish makes animals choke. All people need to do is put rubbish in the bin instead of on the ground” – Arya Trisha, age 7

“My artwork has words written on the bottles telling people how important it is to not have rubbish on the beach because more animals will die… To help fix this problem of plastic in the ocean, we should build lots more bins on the streets to make it easier for people” – Disha Gandhi, age 8

“In my artwork I’m looking at the earth and the importance of taking out plastics in order to cleanse these systems” – Mahima Soni, age 12

“My artwork is about how important it is for humans to help all animals escape rubbish in their environments” – Jiya Patel, age 13

“People have different opinions about the planet and if it’s too late to save the oceans or not. I don’t think it’s too late. We need to have more public events where the community can come together to clean the environment or just talk about the important issue”  – Maheen Tariq, age 15 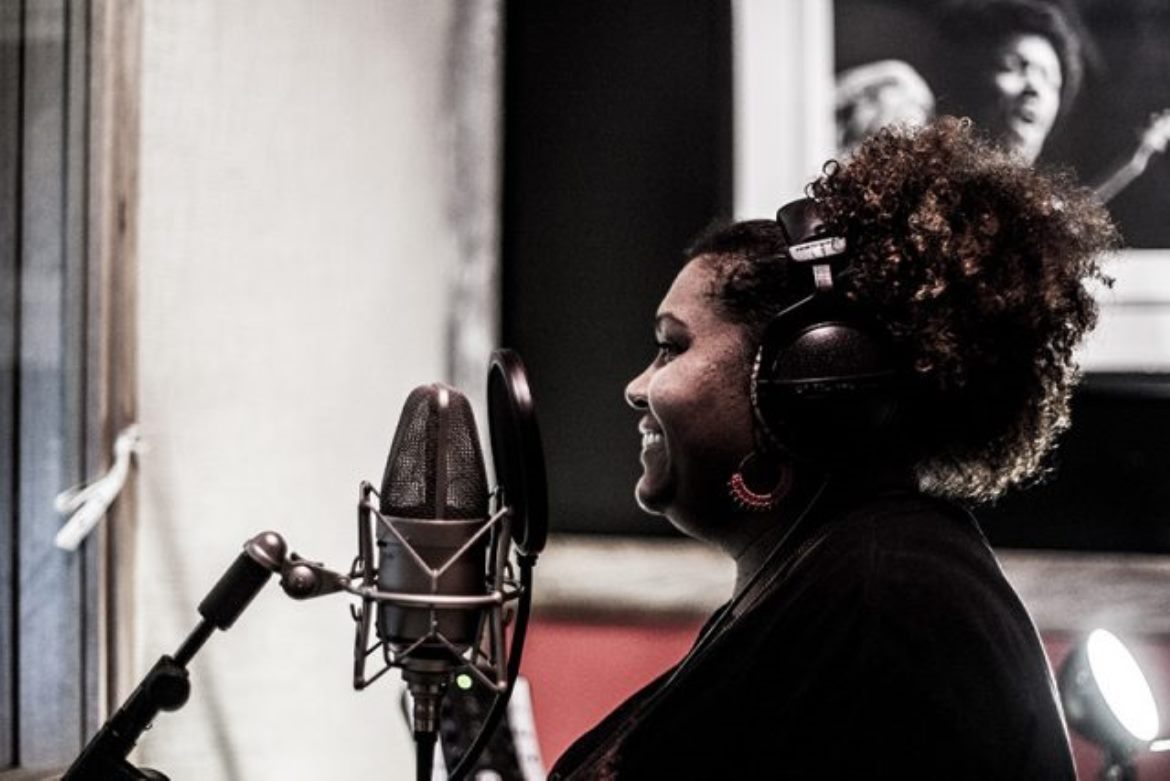 The Sunset Sessions run every night during the Blak Box – Four Winds season at the Blacktown Showground Precinct.

Listen to live entertainment each night, enjoy refreshments from our donation bar, and grab a bite to eat at the adjacent Groundskeeper Cafe before your session inside Blak Box.

Friday 11 January 2019
6.45 pm  and 8 pm
DJ Black President
Bow down to DJ Black President (aka Leo Tanoi) as he governs the people with his unique blend of hip hop, soul, funk and electronic vibes – specially curated for the Blak Box – Four Winds experience.

Thursday 17 January 2019
6.45 pm  and 8 pm
Montanah Grace
At just 11 years of age, Montanah Grace is known as “the little girl with a big voice.” Hailing from Penrith, Montanah will blow you away with her beautiful ballads.

Saturday 19 January 2019
5 pm
The Art of Blak Space
with Kevin O’Brien, Linda Kennedy and Daniela Hromek, facilitated by curator, Daniel Browning.
Join this panel of maverick First Nations designers and architects who are paving the way with their culturally informed and inspired practice.
Register your interest: rsvp@urbantheatre.com.au
6.45 pm and 8 pm
DJ Black President

Wednesday 30 January 2019
6.45 pm and 8 pm
Emma Donovan and Eric Avery
Emma and Eric have created something really special with their new compositions for Blak Box – Four Winds. Join them for this special one-off performance.

The Blak Box Sunset Sessions are proudly supported by Blacktown Arts, and Suzy Wolanski and family. 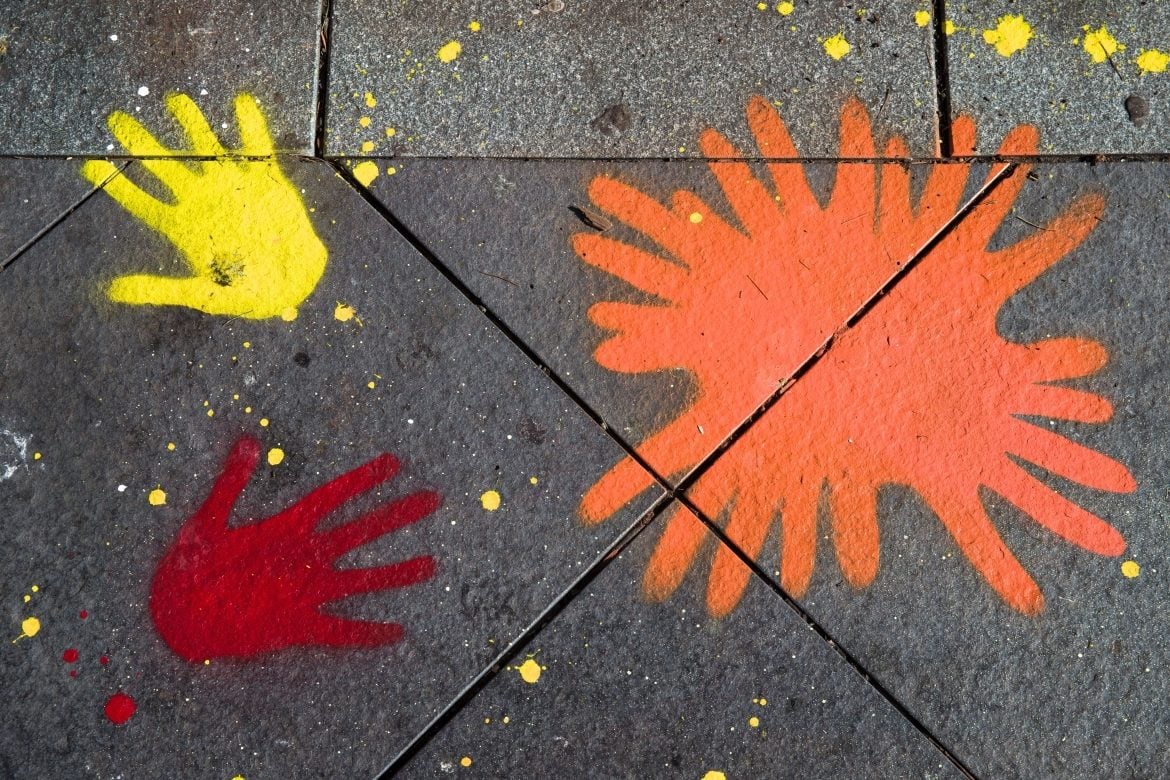 The objective of the project is to commission artists to design and install artworks in two (2) separate laneways within the Blacktown CBD. That is, to turn public laneways into engaging, creative, and imaginative spaces that improve the community interaction with the space, improving the aesthetics of the space and minimising the potential for graffiti and other types of vandalism.

Artists can receive up to $40,000 per laneway to coordinate and execute the design, fabrication and installation of the artwork/s.

The themes and medium for the artwork/s are open to interpretation by the artist. The artwork doesn’t have to be a painted mural but it has to be in keeping with the street art and Hip Hop movement in Blacktown.

It’s Our Thing: More History on Australian Hip Hop Parts 1 and 2, was a series of exhibitions and performance programs undertaken in 2016 & 2017 on the current practice and past archive of artists linked with the Hip Hop movement in Blacktown. 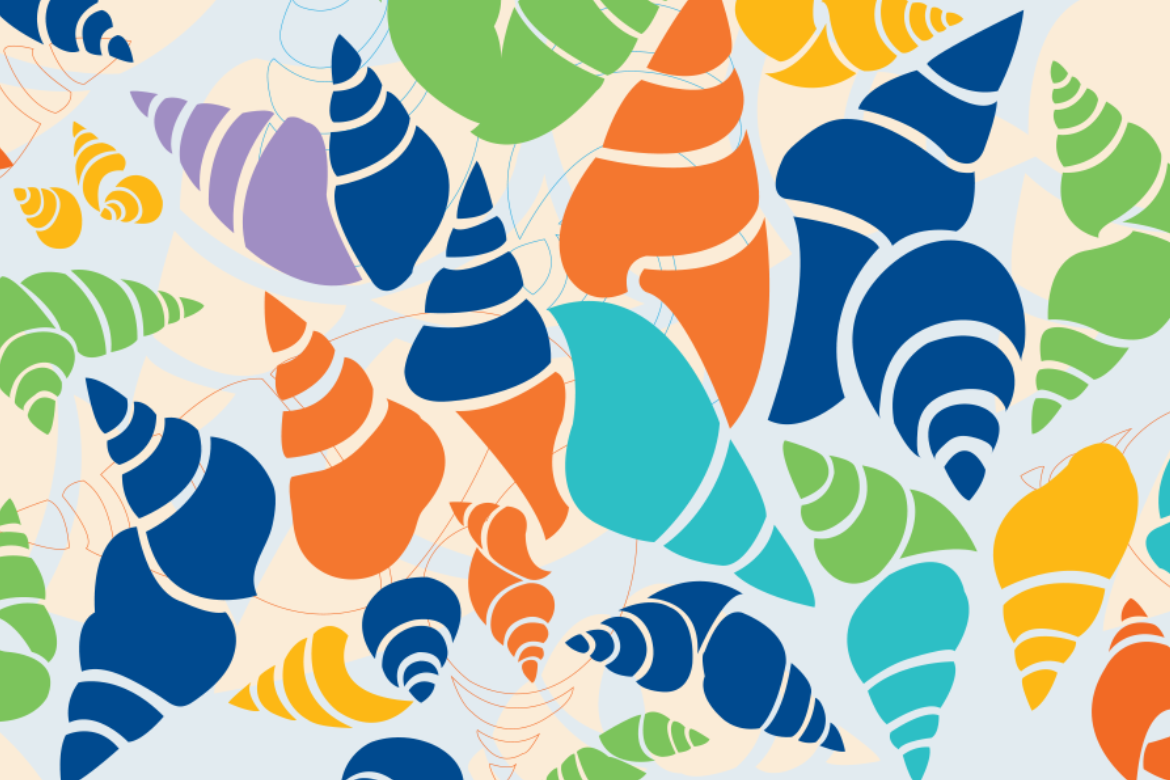 When will we see you in Blacktown?

Click on the images below to browse our 2019 program (or download the PDF) and plan your visit today. 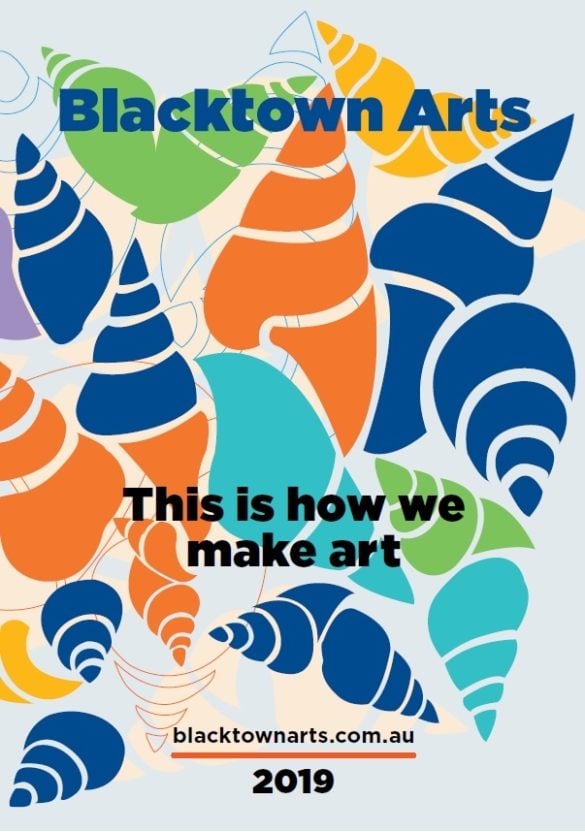 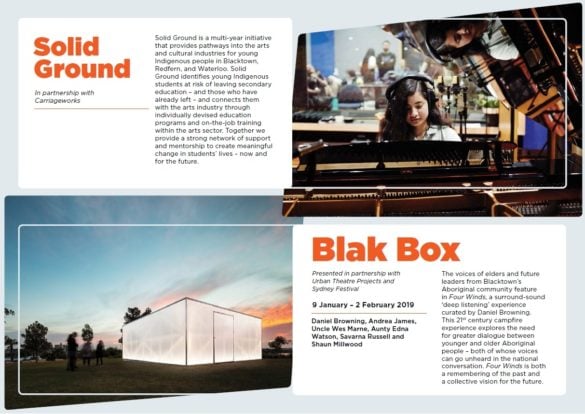 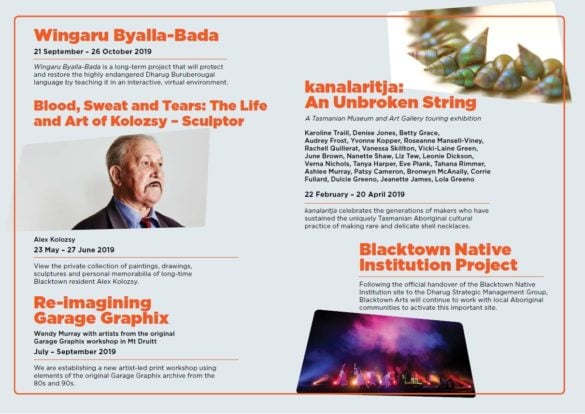 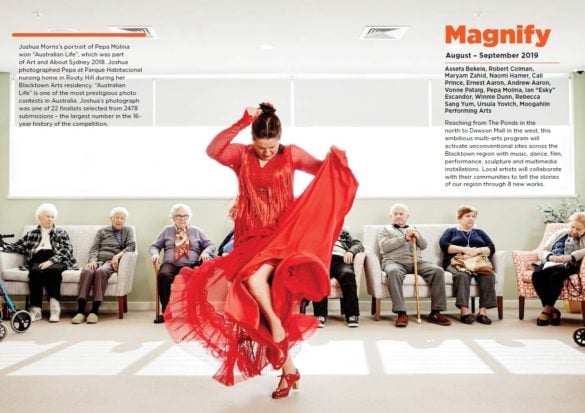 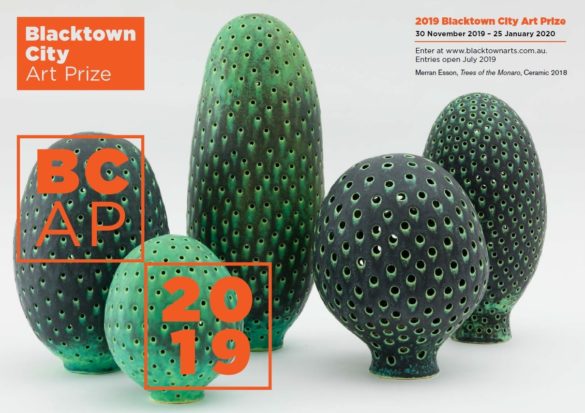 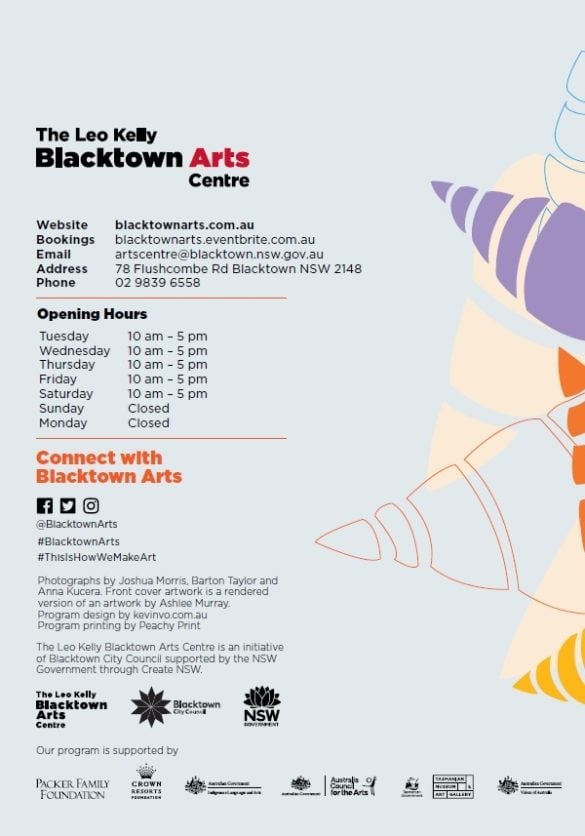 Image
Artwork is a rendered version of an artwork by Ashlee Murray.
Design: Kevin Vo